A pint of whelks, and other reasons Britain is shit at street food

BRITAIN now enjoys the incredible street food of a host of nations, which is fantastic because ours is shit. These are the vile things we eat with our fingers:

The Victorians did many great things for Britain, though perhaps on reflection not so for other countries. But deciding that consuming several dozen chewy sea molluscs constituted a tasty meal was a crime against humanity, and the same goes for cockles and any other rubbery sea-dwelling invertebrates.

A picnic staple, which says a lot about picnics. Most right-thinking people have long realised that a lump of suspicious ham wrapped in slimy jelly and encased in a tomb of pastry is deeply wrong. All they’ve got going for them as street food is that they can be shoved in a handbag or pocket without fear of disintegration.

Despite coming wrapped in paper, fish and chips don’t work as street food because there’s too much of them. Rather than being a light snack to eat on your way somewhere, this is a massive meal that requires the commandeering of a bench and its hosing down to clear the vinegar and grease afterwards.

Purchased from a van and designed to be eaten on the move, the ’99’ is the pinnacle of British street food innovation. However, when compared to the myriad flavours of Italian gelato, a Mr Whippy dripping with sauce reminiscent of fake blood just isn’t that impressive.

Fancy consuming the disturbingly soft flesh of a long, sinuous sea-snake suspended in spicy jelly? Sounds foul and tastes foul, whatever some trendy Hoxton hipster will try to tell you as he sells you a plate for an eye-watering £14.50 at a farmers’ market when you’re hungover.

'You f**king calling me a liar?' says Archbishop of Canterbury 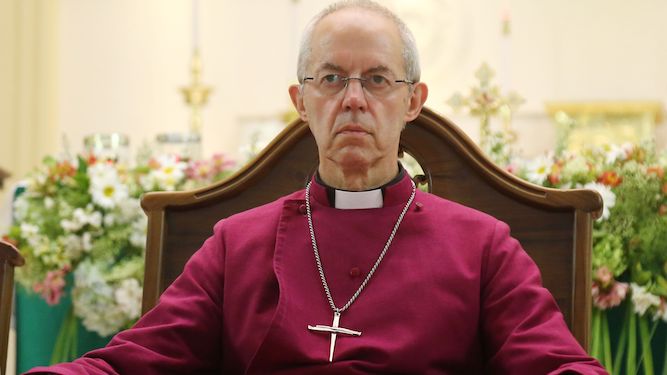 THE Archbishop of Canterbury has told Harry and Meghan that if they want to call him a liar he will come round and they can do it to his f**king face.

The principal leader of the Church of England has challenged the couple to call him a liar when he is right there with his f**king crosier after a disagreement over when their legal wedding ceremony took place.

The Most Revd Justin Welby continued: “You run over there and blab your twat mouths to Oprah and you think I won’t hear about it?

“I remember the real wedding pretty distinctly, mainly because it was on TV and the whole f**king world was watching. That doesn’t tend to slip the mind.

“And now you’re asking me to pretend your pokey little garden party nobody went to, and I only attended because I heard there was free booze, was the real wedding. No bastard way.

“Anyone who’s watched as much Don’t Tell The Bride as I have knows shit like that just don’t count. So don’t be out here telling lies about me.

“I know the big man, yeah? Call me a liar again, I put in a prayer. Yeah that’s right. Now you’re scared.”