VEGAN cheese has been cast back into the hell from which it was spawned from, exorcists have confirmed.

Vegan cheese, which is made from tumble weed, rat’s urine and Anne Widdecombe’s discarded handkerchiefs, escaped from the realm of Satan in 2007.

Priest, Father Wayne Hayes, said: “I mistakenly threw vegan holy water at first and it just bubbled, cackled and hissed at me.

“Then it shouted ‘Your mother sucks Edam in hell,’ as well something very nasty involving the c-word which I felt was unnecessary.

Wetherspoons to replace foreign beers with bags of glue 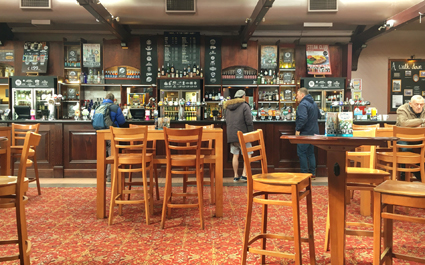 The pub chain said the move would support ohe UK economy and ‘stick two fingers up to unelected Eurocrats’.

A spokesman said: “Bags of glue got the nation through the ‘70s and there’s no reason they won’t get us through Brexit.

“We want our customers to remember a time when pubs were full of short-lived euphoria followed by headaches and nausea.

“We know they will get behind this. They got behind Corona, so they’ll get behind anything. We’ll probably just sell it for a quid a bag.”

Specially produced ‘sniffing glue’ has been sourced from factories in Coventry and Leeds, with the extra business set to create up to 400 jobs.