Woman who thinks tofu is disgusting can't get enough of sausages

Carolyn Ryan of Bedford often expresses how foul she considers things like nut roast, whilst happily tucking into mechanically reclaimed chicken slurry that has been made small and round and called a nugget.

She said: “Give me a veggie burger and I’ll give you a punch in the face. What the hell are they made of? Mushrooms, beans and squished-up turnips? Sounds vile.

“Same goes for tempeh, seitan and anything else that tries to replace animal products. It’s weird, whereas eating the kidneys of a pig is very normal.”

Friend Nikki Hollis said: “I offered Carolyn a coffee with rice milk in it the other day and she went mental. I said I just don’t fancy drinking cow hormones and she called me a ‘disgusting freak’.

“She was eating chorizo at the time, made from delicious lymph nodes, but she seemed unable to see the irony. There’s no telling her that plant-based food is less disturbing than bits of dead flesh.”

She added: “Apart from Quorn. That is weird.”

Man ejected from sofa in favour of blanket 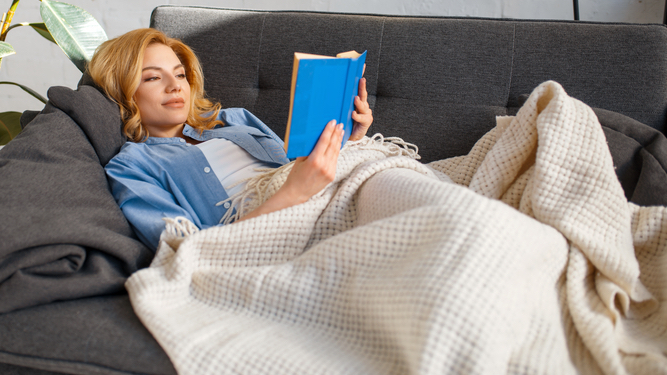 A MAN has been ejected from his living room sofa so his wife has space to enjoy a blanket.

Tom Logan was given a look of pure evil as he tried to share the comfy throw, making him realise he should instead sit on the old armchair in the corner.

Logan said: “I thought it would be nice to snuggle up with Sarah, but apparently she only wants quality time with an oversized knitted item from Habitat.

“I bought it for her too. It really hurts to be cuckolded by your own present.”

However wife Sarah denied any callous treatment, saying she had generously given her husband a cushion before sending him on his way.

She said: “Not one of the posh cushions, obviously, but one that at least stopped a few of the armchair springs sticking in his back.”

In the past Logan had also been thrown off the settee because Sarah was spending quality time with the cat, a Tesco Finest lasagne and the Christmas Radio Times.