ACCIDENT and emergency services can now only be accessed via the internet, the government has announced.

Health secretary Jeremy Hunt said: If you or a loved one is facing a medical emergency, you should proceed immediately to the nearest PC, iPad or outdated internet cafe.

Following a Skype assessment you will be told how to treat yourself.

“In many cases this will be straightforward, such as closing up a wound with toilet paper, Sellotape and a dab of TCP.

In the case of a heart attack, friends of the afflicted will be advised to stick their fingers in a light socket and turn it on and off to act as a defibrillator.

During treatment the atmosphere of A&E will be recreated by having an incredibly pissed girl with fairy wings wandering around the screen calling everyone bitches and slags.

Hunt admitted that a higher mortality rate was to expected among injured people with dial-up, or who live in a shared house where someone is streaming video upstairs. 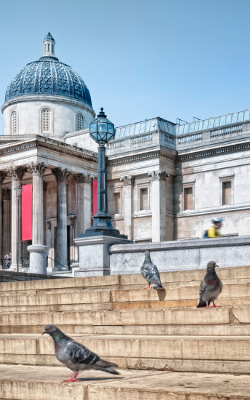 THE famous 40-a-day pigeons of Trafalgar Square are going to ignore new laws against smoking in public.

The fag-addicted birds are a huge tourist draw, with visitors clamouring to throw cigarettes to the pigeons, watch them light up using their hand-like claws and then smoke right down to the filter.

But proposed laws against public smoking could end the tradition of wizened birds puffing away on the steps of Trafalgar Square.

Tour guide Donna Sheridan said: It all began in 1582, when Walter Raleigh taught a crippled pigeon to smoke a pipe for the amusement of Queen Elizabeths court.

Soon every gentleman in the capital kept a puff-pigeon and during World War Two Winston Churchill himself would bring his cigar butts down to give to the birds.

To this day, anyone strolling into Trafalgar Square with a lit fag will be mobbed by feral pigeons.

Which is tremendous fun and not at all horrifying.

The Mayor of London said: A flock of coughing birds begging for cigarettes is a bad advert for the city.

The birds will be humanely weaned off their habit using nicotine patches, counselling sessions and hard-hitting images of pigeons smoking through holes in their throats.

I believe that once the pigeons kick the habit their plumage will stop being a dull grey and they will unfurl magnificent colourful wings.