CIRCUSES across the world were celebrating last night after a bearded lady give birth to a baby girl.

The woman and her beard gave birth naturally at the hospital in Oregon surrounded by fire-eaters, trapeze artists and a small car full of clowns.

Obstetrician, Dr Tom Logan, said: "When they brought her in, I saw the beard and assumed she was a man.

"I said to her, 'I hope you're not planning to squeeze this baby out through your penis, because that would be incredibly painful'.

"But then I lifted up her gown and saw that she had a perfectly normal vagina.

"Given that she was in the advanced stages of labour I concluded the vagina in question was almost certainly connected to a fully functioning womb.

"'Oh, you're not a man', I said, 'you're just a lady with an impressive beard and no charlies. A bit like my cousin Ethel'."

Dr Wayne Hayes, the hospital's chief of medicine, added: "We get quite a few people coming in, who are not 100% sure what sex they are. Sometimes it's a woman with a beard. Other times it's a man with great big breasts.

"It's a complex condition, so the first thing I do is ask them to drop their trousers or lift up their skirt so I can have a bit of a poke around. That usually gives us a fairly big clue."

He added: "These days a lot of people seem to think womanhood is defined by a fondness for live yoghurt and Grey's Anatomy, when actually it's about having a vagina."

Transport And General Workers Union To Merge With Mafia 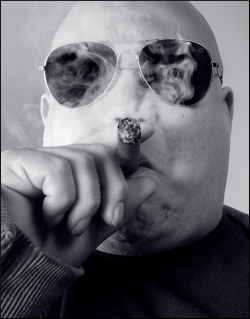 A NEW chapter has been written in the 86-year history of the Transport and General Workers Union after it agreed a merger with the New York Mafia.

Members of the T&G voted unanimously to join forces with the largest of the so-called 'Five Families' after 800,000 horses' heads were found at the bottom of working class beds across the UK.

The new super-union will have more than three million members and be controlled from the back of a delicatessen in Queens.

The merged union's new general secretary, Peter 'Fair Day's Pay' Clemenza, said: "I would like to pay tribute to my great friends from across the water who have come to a most sensible decision.

"But remember what we agreed: play it cool and you don't wind up in the back of no refrigerated truck with a hook in a place you don't want it. Capice?"

Clemenza said British trade unionists would benefit from a stronger bargaining position as well as a share of the proceeds from gambling, prostitution and 'those big, fat trucks coming out of La Guardia, just ripe for the picking'.

He added: "We are keen to sit down with your chancellor of the exchequer and tell him how things are gonna be from now on."

In the UK the merged union will be known as Workers Uniting, while in the US it will continue to be known as 'the thing' or by its more formal name 'this thing of ours'.