In addition to feelings of well-being and euphoria for the blowee, the study shows that the blower gets a health boost, reduces their risk of depression, and increases their chance of a cash reward.

Professor Henry Brubaker, from the Institute for Studies, said: “I noticed that the men who stagger from Hampstead Heath in the early hours of the morning were the happiest and healthiest men in London.

“It’s taken years of research, but I’ve finally proved my ex-girlfriend was wrong and I was right. If only she’d taken her medicine – as prescribed – how happy she’d be.”

Emma Bradford, from Hatfield, said: “Perhaps I’ve been doing it wrong. Is that even a thing?”

But not all men have welcomed the news. Builder Charlie Reeves said: “For 20  years I’ve been telling miserable, cock-teasing lesbians they could put a smile on their face by sucking my dick.

“It’s quite unsettling to discover I’m some kind of medical idiot savant.”

Meanwhile a new campaign has been launched, clarifying the health benefits apply only to fresh semen so that Holland & Barrett doesn’t ruin everything.

Harry’s arse 'a mirror to the soul' 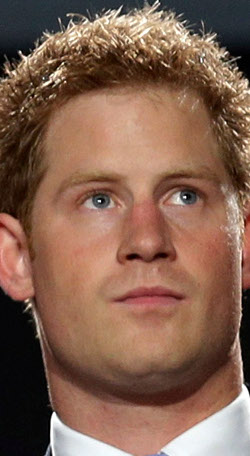 PRINCE Harrys naked buttocks are a blank screen onto which Britain will project its hopes and dreams, it has been confirmed.

Reactions to the arse have ranged from virulent republican fervour to furtive middle-aged frotting, as experts said the buttocks have created a shortcut to the national subconscious.

Royal watcher Denys Finch-Hatton said: Looking deep into those pale cheeks, people will see what they want to see.

“Which in my case is finding a job that does not involve talking about a Sloanes ringpiece.”

Psychologist Julian Cook said: For many the arse symbolises the irreversible decadence of modern society;  a snapshot of a lost youth; or a burning desire for a new big-screen telly, like the one in the background.

Members of the public have projected their deepest feelings on to the arse, with many claiming it is some sort of turning-point, while others said it was the sordid wake-up call Britain needed after the Olympic goody-goody shit-fest.

Helen Archer, from Peterborough said: “He’s just like any other  normal young lad spending five grand a night in Las Vegas and living a life completely free of consequences while the people who pay for his security guards are being gang raped by British Gas, RBS and the Inland Revenue.”

But Bill McKay, from Doncaster, added: “His mum was Princess Diana so he should be allowed fuck whoever he wants. The next time he’s in Doncaster he really should have sex with my wife.”

Historian Tom Logan stressed: “Harry is behaving in a manner typical of young, wealthy pricks since the pharaoh princes raced camels through Luxor at three o’clock in the morning.

But it’s sad because deep down he just wants to be taken seriously as a man who kills brown people with his toy helicopter.”

Meanwhile the press responded to the Royal Family’s demand to have the photos banned with the four million acres of Jubilee coverage and a note asking if they are fucking kidding.