CHILDLINE, the charity for abused children, will tell distraught Harry Potter fans, upset at the ending of the final book, to 'fuck right off'.

The charity is predicting a deluge of pathetic, over-indulged youngsters when the final installment of the fantasy series is published this weekend.

A Childline spokesman said: "Children have become so detatched from reality that they will gladly waste our time crying down the phone because of an entirely fictional trauma.

"It's very easy to blame people like Esther Rantzen and Lorraine Kelly for this relentlessly sentimental and immature approach to life, so let's just do that."

As fears grow of mass suicide among seven to 39 year-olds, Harry Potter publisher Bloomsbury has been installing nets and crash mats around tall buildings .

And the owners of large Gothic buildings are bracing themselves for millions of bouquets being left at the gates, because it bears a faint resemblance to Hogwarts school.

"There are children trying to get through while they're being beaten up, but by all means give Childline a call because you don't like the ending of a book, you spoiled little shit."

Brown Gets Green-Light To Murder Enemies 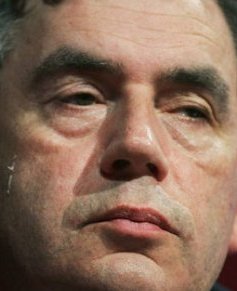 PRIME Minister Gordon Brown will today begin a cull of his personal and political enemies after being given the go-ahead by the Crown Prosecution Service.

With Labour now effectively immune from criminal charges, Brown plans to spend the summer wiping out all those who have crossed him since childhood.

Whitehall sources said the decision not to bring charges in the cash for honours inquiry, despite the piles of invoices, receipts and signed confessions, means Brown can begin working through his 200-page 'bastards list'.

One senior Brown ally said: "Obviously we can't go around killing people if there's any risk of prosecution. We checked that with Putin.

"There's nothing quite like immunity. It's better than chocolate-covered sex. I personally handed the CPS a note which read, 'thanks for my peerage in exchange for the £50,000 donation, I love my new office' and they chucked it in the bin."

The source added: "If I was Peter Mandelson, I'd be disguising myself as an old woman and heading for the airport."

All life peerages are being slashed from £20,000 to £7500, not including robes, stationery and junior ministerial positions.

Labour is also offering to abandon key policies with prices starting at £250,000 for a u-turn on planning regulations, right up to £2.5 million for an immediate, full-scale withdrawal from Afghanistan and Iraq.