Flapping Your Gums All Day Is Not Exercise, Women Told

For years thousands of women have claimed to follow a strict regime based on walking to a bar, picking up a heavy glass of white wine and then sitting down with a friend and flapping their indestructible gums without pause for breath.

But now doctors have warned that talking about the size of your buttocks for two hours is not the same as going for a jog.

Dr Tom Logan, head of buttocks at the Institute for Fitness, said: "Obesity is now the number one cause of conversation in the EU and North America.

"Since the mid-1990s the driving purpose of Western society has been to facilitate discussions between women about how fat or thin they currently feel.

"All television programming and advertising is designed to either sell something related to female self-image or to kick start a conversation about thighs.

"We recommend that women find a window between chats so they can actually get off their arses and do something about it instead of just talking and talking and talking until I develop an irresistible urge to get in my car and drive off a fucking bridge." 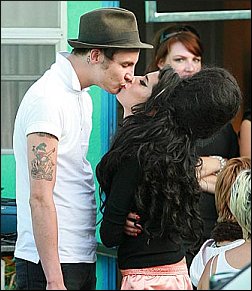 THE husband of singer Amy Winehouse is demanding to be executed in a last ditch attempt to avoid another moment in his wife’s company.

Blake Fielder-Civil is awaiting trial on a number of charges but has already lodged an appeal asking to die by firing squad.

His lawyer, William McKay QC, said: “My client understands that Britain has turned away from the death penalty, but he simply asks you to look into your hearts, or at least play the first 30 seconds of his wife’s latest album.”

He added: “Seriously, she’s such a total cow.”

Wayne Hayes, a human rights activist, said he had devoted his life to campaigning against the death penalty but was prepared to make an exception for Mr Fielder-Civil.

“Have you heard the women sing? No wonder her hair sticks up like that, I think it’s a cry for help. I’d have flung myself off the roof by now. The boy deserves a street named after him.”

Meanwhile Winehouse could face charges over claims she stole her singing voice from Butterfly McQueen, an 83 year-old black woman from Augusta, Georgia.

Mrs McQueen said: “I done gone lend that white bitch my vocalising chords and she be nothing but using them to cuss and fight and all. But what’s a poor black folks to do? She done broked it.”