AVERAGE life expectancy can be extended by up to 10 years as long as you are willing to reek like a Frenchman, it was claimed last night.

A new study found that showers are filled with deadly bacteria, vindicating the French habit of using them as a place to string up dead geese.

Research director Professor Henry Brubaker said: "Every time you turn on a shower you may as well be smearing great handfuls of dog mess into your chest.

"Of course the French will claim to be ahead of the curve but the fact is they know nothing of shower based bacteria and simply enjoy stewing in their own effluent."

He added: "Nevertheless it is better to carry the heady stench of the Gaul than expose yourself to the sort of tiny risks that generate gigantic headlines."

The French currently enjoy one of the highest rates of life expectancy in the developed world with many experts claiming they would live even longer but for their habit of driving to each other's birthday parties on the wrong-side of the road while wearing a blindfold.

"Eef ah was to use eet for washing myself like some American woman ma cheese would lose eets distinctive flavour."

Architect Claude Dufarge insisted Parisiens use their showers in a more sophisticated fashion than their rural counterparts, adding: "Ah 'ave a cubicle een ma appartement. Ah use eet as a place for contemplation and for 'aving sex wiz ma neighbour's 19 year-old daughter, after which ah smoke une cigarette and loathe myself."

Meanwhile the relatively hygienic Japanese still top the table for the longest average lifespan, but experts say that is down to a lifestyle which includes a large amount of oily fish in their showers.

Adebayor To Thrust Genitals In Face Of Every Arsenal Fan 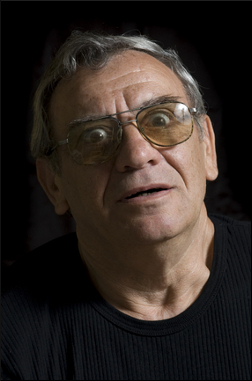 EMMANUEL Adebayor has embarked on a cross-country quest to stick his business in the face of every Arsenal fan in the UK.

The Man City striker set off from his Cheshire home on Saturday night and is expected to spend four days shoving his penis through the letterboxes of ex-pat Arsenal fans in the Midlands before basing himself in North London for the rest of the month.

Adebayor said he plans to jump out of doorways in Highbury, Islington and Finsbury Park, grab his victims by the hair and then ram their faces directly into his exposed crotch.

But in order to maintain a high rate of genitally-based offending he will also run into pubs popular with Arsenal fans, stand on a table, take down his trousers and pants and spin round in a circle while thrusting his pelvis.

Arsenal fan Wayne Hayes was visited by Adebayor in the early hours of Monday morning. "I heard a noise and went downstairs to see what looked like a slightly undercooked black pudding sticking through my letterbox.

"I then heard the football boots clattering down the path and someone shouting 'take zat, you silly fooker', so I knew it was him."

He added: "While I retain a strong antipathy towards the rugby coach who took my virginity aged 14, Adebayor now sits proudly atop my sports-based shit-list."

The striker said: "Scoring against ze Arsenal and celebrating so provocatively should make me ze most 'ated man from north of ze Wash since, 'ow you say, Stan Boardman.

"But I will not be 'appy until I 'ave banged my danglers against ze chin of each and every one of zem."