NHS officials have defended their decision to employ thousands of bats at a Scottish hospital.

The bats were brought into Ninewells Hospital in Dundee after unseasonably large numbers of common pests like moths, lizards, ants, cockroaches and bantams were spotted in general medical wards and specialist outpatient departments.

Facilities manager Bill McKay said: "We had a dreadful problem with moths in the operating theatre, buzzing around the light fittings and falling into patient's chest cavities or getting lodged in their throats.

"The bats have made a real difference. It's just the hornets we need to take care of now, but the bats won't go near them."

The Ninewells bat strategy is part of a UK-wide NHS initiative to reduce ward-based vermin levels to 420 per patient by 2011.

McKay added: "Initially we discovered a colony of pharaoh ants that were thriving off all the blood on the floor in A&E. To get rid of them properly would have cost something in the region of £100 so we had to start thinking outside the box.

"We simply transferred a load of giant dung beetles from radiography and they were gone in no time.

"What we didn't realise is that the beetles loved to crawl up patients' trousers and lay eggs in their genitals, so of course, they had to go. So that explains, to some extent, the disproportionate number of chameleons in there at the moment."

McKay has assured patients the bats and chameleons are a necessary measure to rid the hospital of pests, but insisted an end is in sight: "As you get further and further up the food chain, the less predators are required to keep numbers in check. For example, we envisage only needing two alligators to deal with the nuisance water buffalo in the canteen." 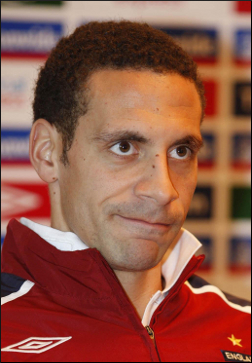 ENGLAND'S 1-0 defeat to Ukraine did not happen because no-one saw it, Fabio Capello insisted last night.

With millions not watching the game on the internet, the England coach said that there was nothing to see anyway and therefore England could not possibly have lost.

Cambridge philosopher Tom Logan agreed with Capello's assessment, insisting: "This is the age-old problem of subjective idealism which continues to divide the metaphysical community. Namely – can an England defeat exist without being perceived?"

He added: "Indeed, if a Rio Ferdinand falls in the forest and no-one is around to hear it, does it make a sound?

"And come to think of it, does it even know that it's fallen over unless someone is there to shout 'Rio, you've fallen over again, try standing up'?"

Capello said: "I suppose it's a bit like pulling a minger on holiday – if your mates aren't there, it sort of doesn't count. Much the same as taking a shit in an alleyway at three o'clock in the morning."

But people who did see the match and insist it really happened said England's defeat stemmed from a defensive lapse by Ferdinand after he tried to gather up the 'fizzy Christmas lights' being thrown on to the pitch.

England fan Roy Hobbs said: "At first he was just chasing them and then he decided to pick one up. He stared at it for ages. Maybe he thought there was fairy inside it."

Meanwhile England have a depleted squad for Wednesday's game against Belarus, due to a combination of injury, suspension and preferring to stay in and watch Jason Statham DVDs.

Capello added: "We may as well be playing Wales."