NHS To Use Staples For Everything

THE National Health Service is to start using staples for everything, doctors confirmed last night.

Following a 40% rise in the stapling of fat people, the NHS has now unveiled plans to move to an entirely staple-based medical system by 2014.

From next April obese people will be stapled to the back of a horse so they either run off their extra weight or have it gradually rubbed off as they are dragged along the ground.

Smokers will have both hands stapled to their buttocks, while anyone who drinks more than one glass of wine a day will have their nostrils stapled shut so they can only take brief, tiny sips.

Meanwhile GPs have been told to stop prescribing painkillers and antibiotics and are instead sending patients away with large fistfuls of 4mm-wide staples to be taken every two hours.

Julian Cook, a consultant stapler at the Royal Free Hospital in London, said: "There was some debate about whether to use staples or elastic bands. In the end we went with staples as we got a really good deal from Staples."

He added: "The applications are limitless. Say someone presents with persistent insomnia, we could prescribe sleeping tablets or a course of therapy, or we could just staple his eyelids together. It's so much easier to get to sleep if you can't open your eyes."

Private medicine has already embraced the new technology with the Harley Medical Centre offering a wide range of face-stapling techniques.

A spokesman said: "Our basic treatment involves sitting you in a dentist's chair, spanking you squarely on the bridge of your nose with a hammer and then stapling together anything that bursts." 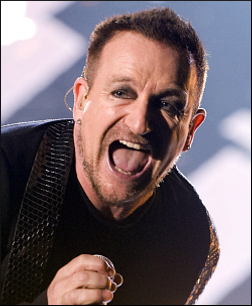 POPULAR music is to remain exactly as it is for ever and ever after Oasis were named best band at last night's NME awards.

The band, hailed as a 'fresh and exciting group of middle aged men from Manchester' have impressed critics with their fresh, exciting songs that all sound exactly the same.

Tom Logan, assistant editor of NME, said: "It's so exciting for British music that a really fresh middle-aged band like Oasis is being recognised for doing the same fresh and exciting thing over and over and over again for what must be the best part of 20 years."

Logan added: "Their sound is so fresh, so exciting and so completely unlike anything we've ever heard apart from absolutely every single note played by the Beatles, as well as the Rolling Stones, the Who, the Kinks, the Smiths and, obviously, the Stone Roses."

Meanwhile the BBC is devoting an entire week of programming to rock's freshest sensation, a fresh and exciting group of middle-aged men from Dublin called 'U2'.

Director general Mark Thompson said: "I discovered U2 last year when they were playing some tiny, little spit and sawdust Olympic stadium in Rome and I knew straight away they would need lots of help from the BBC in promoting their new album."

He added: "They're not your typical Dublin band, they're actually a really fresh and exciting group of millionaire property developers who have invented this fresh, exciting sound where all the songs are exactly the same.

"I imagine it's what the Stranglers would sound like if they were asked to do a Diet Coke advert."