Smokers More Likely To Be Eaten By Dragons

SMOKERS are nearly five times more likely to be eaten by dragons than non-smokers, a new study suggests.

The results are the latest blow to tobacco after a series of recent studies which showed smokers faced a higher risk of being hit by a comet, falling into a hole and being mobbed by bees.

Professor Henry Brubaker, research director at the Institute for Studies, said the causal link was as yet unclear, but suggested it was probably to do with flavour.

He said: “Just a few years of smoking 20 a day can add real depth, giving them that oaky richness that dragons find so morish.”

In tests, dragons tended to ignore non-smokers or nibble on them half-heartedly, rarely managing to finish a whole one. However, smokers were consumed so quickly and in such numbers that they could have been chicken goujons.

Professor Brubaker added: “Some dragons can become addicted to very heavy smokers. If that happens we usually advise them to chew on a social smoker or strap one to their arm.”

Lifelong smoker Bob Andrews, 57, said he was quite worried about dragons, but it was the increased risk of falling into a hole that would finally make him quit.

He said: “In the old days all you had to worry about was lung cancer and heart attacks, but all these studies about holes and dragons have finally made me realise smoking is wrong. Thank goodness they spent all that money.”

Britain Explodes At Both Ends 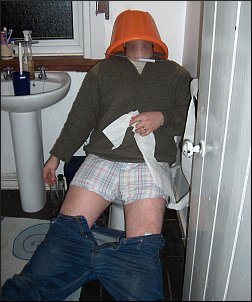 BRITAIN exploded at both ends last night as the latest gastric superbug lit up the nation's bathrooms.

And across the country fans of the virus have been gathering outside bathroom windows to listen to the desperate grunting of their pitiful neighbours.

The outbreak has infected people from all walks of life, including the Princess Royal, who tried to blame a horse for what one source described as a 'back-end catastrophe' on the passenger seat of her Subaru.

Meanwhile Douglas Alexander, the international development secretary, was forced to cancel a series of engagements following a 'departmental incident' in Whitehall.

His spokesman said: "The secretary of state had only just finished wiping all the sick off his desk when he comprehensively shat himself.

"It actually lifted him off his seat. The people in the next room thought someone was deflating a space-hopper."

NHS 24 is advising norovirus sufferers to dig a big hole in the garden and sit in it until they have emptied themselves.

Professor Bill McKay, head of vomiting and diarrhoea at the Stomach Foundation, said: "Norovirus is an acute gastric condition caused by… oh Jesus Christ, these are my good chinos."

Doctors stressed that sufferers must avoid GP surgeries 'at all cost' and should stay at home for two days after the symptoms have gone, due to the high risk of a lingering, malodorous wind.

Dr Tom Logan, a family GP from Lincoln, said: "Norovirus is it? Get out of my office at once, you collosal bag of shit!"