Women told to give birth in safari parks

PREGNANT women have been advised to forget boring hospitals and to go into labour in nightclubs, on trains and in safari parks instead.

New NHS guidance urges expectant mothers to forego a nice, clean bed in a building full of medical professionals in favour of an exciting location that will make a great story to tell the baby when it grows up.

Dr Roy Hobbs said: In the old days, before paid maternity leave, women were always giving birth in shoe shops or at the hairdresser or on the assembly line at British Leyland.

Wed all read the story in the newspapers, chuckle at details like a comb being used to saw through the umbilical cord, and our days would be brightened.

But sadly todays lazy females dont want to give birth to their first child while watching Led Zeppelin at Knebworth, their contractions timed to John Bonhams drumming in Moby Dick, because of silly worries about complications and blood loss.

We need to bring that tradition back, if only because then children would be called things like Uber or Nando instead of them all being called Oliver or Olivia.

Mother of four Joanna Kramer said: I gave birth to my first while white water rafting, my second on a horse and the twins while doing a bungee jump  one on the way down, the other on the way back up.

Of course theyve all been taken into care because Im an unfit mother, but adventurous or what?

Liverpool to let Gerrard play until he is 65 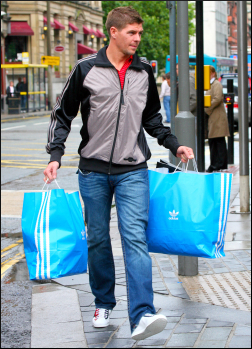 NO-ONE at Liverpool FC has the heart to make Steven Gerrard retire before he is a pensioner, it has emerged.

Future managers at the club will have it pre-written into their contract that they must always select Gerrard even if he can only move about the pitch on a mobility scooter.

Manager Brendan Rodgers said: This club has always been about the heart, the passion and the pointless sentimentality.

Nowhere does this more apply than when it comes to Steven Gerrard. He is Mr Liverpool.

Backroom staff are currently developing a special prosthetic cannon to be attached to the side of Gerrard’s leg should he ever lose the ability to play his trademark 80 yard crossfield balls.

Rodgers said: Only one in ten of the passes from the cannon lands anywhere near the feet of a forward. With Gerrard currently, it’s one in 20 so we’ve got to decrease the accuracy.

Steven Gerrard said: I intend to play on till Liverpool win a Premier League title, however long that takes.

Even if I have to be wheeled around the centre circle in a coffin on castors, I want to play a key role in that triumph. Never walk alone, whatever that means.