A REMAINER who spent five years placing total faith in the wisdom and intelligence of Europeans is watching anti-lockdown riots feeling a total dick.

After half a decade preaching the superiority of Europeans for not making suicidal decisions about their futures, Tom Booker is concluding that protesters burning down primary schools in the Netherlands have made him look like a wanker.

He said: “Guys. Hey, guys. You’re meant to be the rational ones, remember?

“You know, pro-economic good sense, anti-climate change, pro-science. What’s all this rioting? We’ve all had our vaccines, and we’re a nation of delusional idiots.

“I get that you’re angry at lockdowns. We were, but only because our leader’s a pitiful xenophobic chancer who refused to learn from the continent. Your leaders are cool multi-lingual technocrats, yeah? I only know Macron and Merkel but I assume they are.

“If you’re having lockdowns and we’re not, and you’re rioting and we’re not, it’s almost like you’re not effortlessly better than us and my whole dream of Europe as a sensible, wonderful paradise that always does everything right was a delusion.

“And it definitely wasn’t, because the ones who base their politics on delusions of national superiority are the other side. And they’re bad and I’m nothing like them.”

Party Rock Anthem, and other shit songs that soundtracked the 2010s 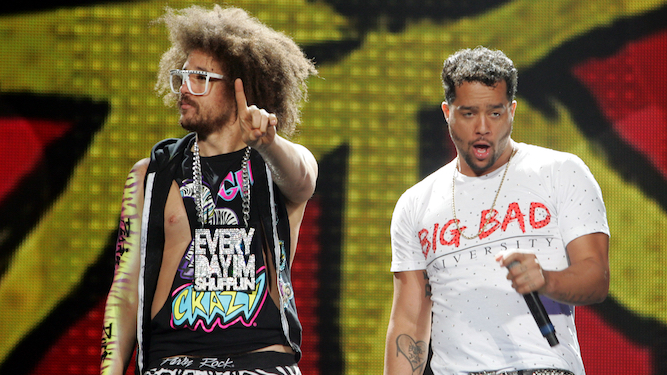 REMEMBER the 2010s as a time of musical experimentation and lyrical brilliance? You shouldn’t. These ear-defiling tracks will forever define the decade:

‘We knew it was shit at the time’, survivors of the decade claim. ‘We didn’t realise that buying mp3s discreetly in the privacy of our own homes would send a nephew-and-uncle duo to number one’. There are no excuses. Especially as Sexy and I Know It was equally huge.

Before Squid Game and BTS, our exposure to South Korean culture came in the form of an overweight man in sunglasses pretending to ride a horse, with a chorus that’s the brain-eating earworm that eats all the other brain-eating earworms. The only mercy is nobody could sing along to it because they didn’t know the words.

Pre-Uptown Funk, Bruno gave us this dark and twisted tale of a relationship where the girl didn’t give a f**k and the boy kept saying he would blow himself up to save her. A claim that can be safely made in the knowledge that it’s not going to happen makes for a creepy incel anthem.

Later in the 2010s we branched out into Latin culture, just like when listening to Julio Iglesias in the 80s and Las Ketchup in 2002. For a whole platinum-selling summer we rocked to Despacito. To this day, no-one in Britain has bothered to find out what despacito even means.

Now remembered as a black chapter in musical history during which a model was groped, a sleazy bloke bollocksed up his marriage and Pharrell f**ked up songwriting law indefinitely. But at the time, high on the previous year’s Olympics and the coalition government, we f**king loved it.

All About That Bass by Meghan Trainor

The novelty body positivity anthem that managed to make everybody feel bad. What’s so bad about treble, Meghan? Don’t we want both, so that our audio can be appropriately balanced? What are you with that bloody bass, a boy racer driving slowly around a sink estate?