BREXIT is receiving record backing from the public after being rebranded as Bring Back Duty Free.

Headed by Nigel Farage, familiar to Southerners as the face of Nifty Nige’s Calais Booze Cruise in the 1990s, the campaign has won the support of 97 per cent of the population in a single day.

“When really, the question being asked is ‘Would you like to come home from holidays on the continent with lots of lovely cheap alcohol?’

“Not just alcohol, of course. Fags, perfume, Toblerones, even sunglasses.”

Supporter Donna Sheridan said: “If we make Scotland independent we can get duty free from there. We’ll do that next.”

Noam Chomsky steps aside to make way for Russell Brand 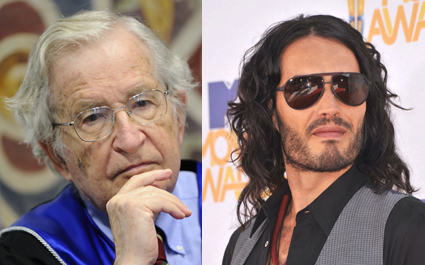 THE world’s most renowned left-wing thinker has decided to retire following Russell Brand’s latest online rant, it has been confirmed.

Noam Chomsky, who has written over 100 books, made his decision following Brand’s new video diatribe in which he accused Boris Johnson of being a “Jihadi John Machine”.

Chomsky said: “Sometimes you have to accept that it is time to pass the baton. Russell Brand has taken political thought to places I could never hope to.

“People might say that he just reads out things off the internet and throws the word ‘dialectic’ in a few times to sound more intelligent, but to be honest, that’s all academia is.

“I may have various honorary fellowships and peace prizes but he has shagged Katy Perry. She’s fit.”

Office stationery supplier Nikki Hollis commented: “Russell Brand has made politics interesting for me, mainly because he talks about it in videos on social media, which means I don’t have to read difficult words in a newspaper.

“I’d much rather be told what to think by someone who is most famous for antagonising Manuel off of Fawlty Towers than by some boring old man in specs. People might listen to Chomsky more if he back-combed his hair and changed his name to ‘Noah’ which sounds cooler.”