VENEZUELAN President Hugo Chavez has banned all material relating to Felicity Kendal, describing her as 'the ultimate sex totem of the idle bourgeoisie'.

The socialist firebrand has issued a decree condeming the British actress as a 'doe-eyed bauble of the fat Western capitalist'.

He added: "Do not be fooled by the muddy dungarees she so coyly sports when pretending to dig her sprout patch with Richard Briers. It is not befitting for the working men of our nation to covet her, however winsome she may be."

Since the ban, bootleg VHS copies of The Good Life, Rosemary & Thyme and the early 1980s comedy drama Solo have been changing hands at Caracas street markets for enough money to feed a family of 14 for a year.

Street vendor, Miguel Hernandez, said: "Our leader has alienated his people. For many life here is very hard, and the thought of Felicity Kendal wearing nothing but a thin nighty made of home-grown spinach is what keeps us going."

The Venezuelan leader also faces accusations of hypocrisy for refusing to legislate on the films of Jenny Agutter, who is claimed by sources close to the president to be a personal favourite, despite offering a similar brand of posh sauciness.

But Chavez insisted: "The issue of Agutter is quite different. Walkabout is packed with socialist subtext, especially the bit where she bathes in the watering hole as the sunlight shimmers off her lithe, rippling body.

"Same with the one where she shags a werewolf in the shower. Marx could have written that."

Men Win Right To Watch Women Have A Sweaty Fight 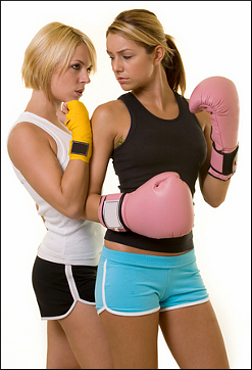 MEN have won the right to watch two women have a sweaty fight as long as one of them gets to listen to her national anthem at the end.

The International Olympic Committee agreed that women punching each other was 'more Olympic' than karate because the competitors would be wearing tight-fitting vests rather than baggy pyjamas.

Girl fights had previously been banned from the event amid claims that while two slim, toned, sweaty women going at each other was obviously worth watching, it was not necessarily a sport.

Advice is now being sought from rhythmic gymnastics experts on how to judge the all-women bouts while hiding a straining erection. A London 2012 spokesman said: "I think the main thing will be to make sure we can see the judges' hands at all times."

The IOC also said girl fights would help make the Olympics more relevant to the East End of London.

Training is already under way in the boroughs of Greenwich and Stratford, with the best medal prospects being told their opponents gave their boyfriends a hand-shandy behind the Odeon.

Meanwhile community activists stressed that if East End women were beating each other up, it would give local men more time to embellish their West Ham tattoos and hand out BNP leaflets.

Girl fight campaigner, Holly Turnbull, said "It's been a long and difficult battle, not least to stop the IOC using the words 'foxy' and 'Angel Delight' at every meeting.

"It's taken took two years for them to agree that we wouldn't have to wear six-inch stilletos and skimpy, leather hotpants."

She added: "Part of our strategy was to show them Million Dollar Baby, although obviously we switched it off before she gets crippled and Clint Eastwood kills her.