End Of US Power Will Not Affect Its Television Programmes, Say Experts

THE waning of America’s influence on the global stage should not affect its ability to produce high quality drama and clever sitcoms, experts said last night.

The National Intelligence Council (NIC) said that by 2025 you are likely to be strapped to a chair and held at gunpoint by Algerian mercenaries while rising sea water laps around your ankles and mutant chickens eat the last of your porridge, but you will still be able to watch Prison Break on your iPod.

According to the report the post-US world order will also see an increase in rogue states run by criminals including Afghanistan, Somalia, Russia and Scotland.

An NIC spokesman said: “America will be a bit like Superman in Superman II when he loses all his power after he falls in love with Lois Lane and then gets beaten up in the diner by that horrible truck driver even though he’s still six foot five and built like a brick shithouse.

“But in this case the falling in love with Lois lane will be six billion highly-educated Asians who will work 18 hour shifts for 50 pence a day while you become too fat to heave yourself onto the toilet.”

Meanwhile the report warns that nuclear technology will put the atomic bomb in the hands of Iran, Egypt, North Korea and Carphone Warehouse.

Television viewer Tom Logan , from Watford, said: “I honestly couldn’t give a tupenny shit whether the world is run by dastardly Chinese communists or insane Russian gangsters as long as somebody keeps making Battlestar Galactica.

“And Scrubs. I just love Scrubs. If you asked them I’m sure a lot of my friends would say I’m just like JD.”

Is It Time To Use Stem Cells For Practical Jokes? 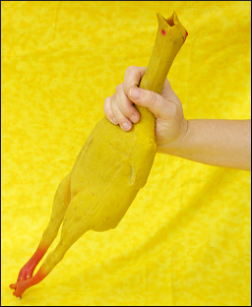 THE medical profession faces a new ethical dilemma after scientists raised the prospect of stem cells being used for tomfoolery and high-jinks.

After the successful transplant of a windpipe, engineered through a combination of a donor organ and the patient's own cells, doctors believe they will soon be able to transplant a windpipe that farts.

Dr Bill McKay, head of ethics at the British Medical Association, said: "It's basically the same technique, so we know we can do it. The only question is – should we?"

Dr McKay said the applications for prank-based stem cell technology were limitless including gigantic monkey hands, a 25ft electric tongue and a concept he refers to as 'Professor Octopus'.

He added: "Curing cancer and replacing diseased organs is all good stuff, but wouldn't it be brilliant for stag nights?

"You could whip-off the groom's genitals and replace them with an angle-poise lamp safe in the knowledge that it wouldn't be rejected. He'd have to walk around like that for hours.

"The joke could even be turned around on the medical profession and you could have some random bloke arriving at A&E with a 26-inch plasma screen lodged inside his genetically enlarged rectum.

"The on-call doctor's face would be an absolute picture."