BEING on the dole in Europe is a more stylish and sophisticated experience than in the UK, ex-pat Britons have claimed.

Jobless IT worker Wayne Hayes said: “At the job centre in Provence all the staff look like Alain Delon and the young Catherine Deneuve, not the depressed lardarses you get in Britain.

“You don’t get any extra dole money but top quality food is incredibly cheap here, so dolies live off foie gras, duck confit and fine Bordeaux wines instead of baked beans, Super Noodles and White Ace.

“Also instead of persecuting the unemployed the French respect them because they think anyone who sits around drinking red wine and smoking all day is probably an intellectual.

“There’s a risk of getting your benefit stopped if you’re not stylish and enigmatic enough, but they give you Christian Dior suits and Gauloises for that.” 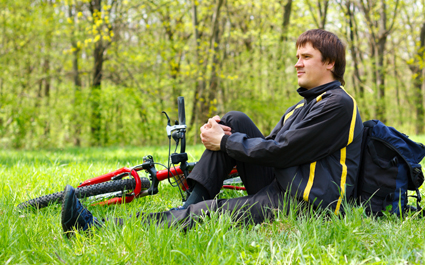 BRITAIN’S cyclists have decided to stop showing everyone their reproductive organs.

A trend for looser cycling apparel means the public will no longer be exposed to images that would be pornographic were it not for a thin layer of Lycra.

Cyclist Tom Logan said: “I have started to think that skintight synthetics which showcase your penis and testicles in forensic detail might not be a good look after all.

Meanwhile female bicycle riders have finally responded to the agonised looks on their colleagues’ faces as they walk into the office with their vulva clearly visible.

Cyclist Nikki Hollis said: “We’ve discovered you can ride a bicycle without looking as though you’re offering your genitals to other road users like a baboon on heat.

“Of course this may just be temporary, and next year cyclists will all be wearing gossamer G-strings and tribal-style penis sheaths.”

Members of the public have welcomed the move, saying the small number of attractive cyclists did not compensate for having to look at the private parts of all the ugly ones.

Van driver Roy Hobbs said: “I hate it when a lovely bum goes past but when you catch up with them you discover you’ve been ogling someone who looks like Alf from Home & Away.”