GREEK debt talks have broken down after the country kept changing the subject to the new series of True Detective.

Representatives from the IMF, the EU and the European Central Bank admitted being frustrated by Alexis Tsipras’s attempts to discuss whether Colin Farrell could adequately replace Matthew McConaughey’s screen magnetism, among other topics.

“And I would prefer to discuss repayment arrangements and austerity measures rather than being dragged into an argument about whether Ant-Man can continue Marvel’s streak of box office success.

“Which it completely can, because Paul Rudd is a very engaging performer who can combine comedy and action as well as Robert Downey Jnr. Oh shit, now I really want to get into this.”

Tsipras said: “It’s been nothing but debt and austerity, over and over again for months. Change the bloody record for five minutes.

“Let’s talk about the new Aero McFlurry or Top Gear or Cara Delevingne instead of bailout debts the whole time.

“I mean everyone knows we’re not going to pay it.”

Trains to run on lorries 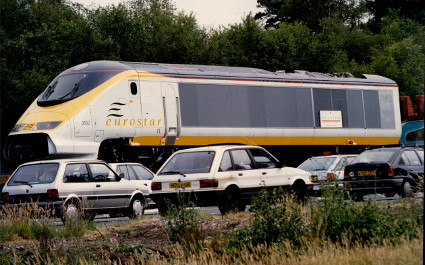 RAIL upgrades will be ditched in favour of putting trains on the backs of lorries, the government has confirmed.

Instead of spending £38.5bn on the rail network, carriages full of passengers will be loaded onto flatbed trucks and driven to railway stations.

Transport Secretary Patrick McLoughlin said: “We need to move past the antiquated Victorian notion of trains running on metal rails.

“The UK’s extensively modernised road network is a far more efficient, albeit much slower and congested, way of transporting passengers to wherever they need to go.

“Simply board your train, remain in your seat while a crane lifts it onto one of our fleet of lorries and sit back and relax.”

McLoughlin stressed the plan would require a large increase in subsidies to rail operators, but this would be offset by a 40 percent rise in fares over three years.