How is Trump planning to be a dick in the UK?

IT’S rare for Donald Trump to go anywhere without being a dick in some way, so what has he got planned for his stay in Britain? Here is his ‘being a dick’ itinerary.

Crazy announcement out of the blue
Completely contrary to the spirit of cooperation, Trump will suddenly announce some horrifically anti-UK policy like demanding his new bud Kim Jong-un is allowed to use Kent as a ‘missile testing zone’.

Completely incomprehensible speech
Sample: “England, America, yeah. I was at a cocktail party in Manhattan. Great, great party. Franny Humpenfinkel was there. Owns 22 stud farms. Bigly good guy. But the point is – Hillary is a liar. A liar and a murderer. That’s it. No more questions.”

Meet with senior UK politicians and diplomats and blank them
Trump to sit there rudely ignoring everyone like a vile, petulant child. He will also spend most of his time tweeting rubbish like “US border control tell me they got dogs can sniff out RAPISTS!!! America comin for ya, Sanchez the rapist!!!”.

Feeble attempt to laugh off protesters
After a huge blimp with the words ‘DONALD IS A THICK FASCIST SCUMBAG AND SHIT AT BUSINESS, ACTUALLY’ on the side drifts over London, Trump claims he could “kick those guys’ asses”, despite being 72 and terrified of his hair falling off.

Romantic time with Melania
Finally a chance for the couple to relax and watch some TV in hotel rooms 150 metres apart.

Golf in Scotland
Harmless photo opportunity and quite jolly until Trump goes off on a tangent and threatens to nuke Belgium, for reasons known only unto himself.

Departure
Spontaneous parties break out in the streets of Britain as Trump flies off to be a dick elsewhere. 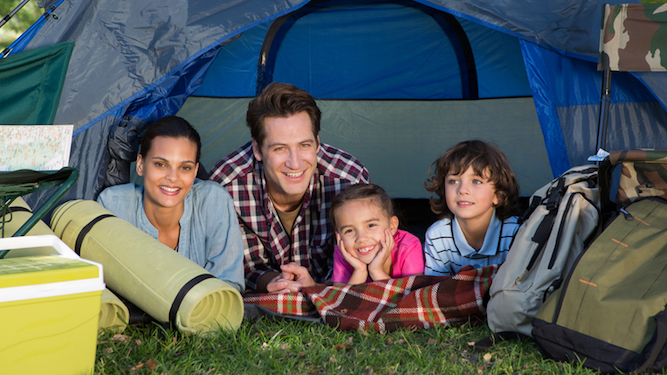 A FAMILY who bought a tent to save money have been forced to blow their life savings on all the fucking equipment you need to go with it.

The Sheridan family of Norwich bought a family-sized tent in the Argos sale before realising they would also need the outdoor supplies of a small army.

“Then we had to buy a secondhand camper van because there was no bloody way it would all fit in the car. Still, at least there’s somewhere to put the mountain bikes. I feel sick thinking how much they cost.

“I’ve been totting it up and once you add in the pitch fees, electric hook-up fees and parking fees I’m pretty sure we could have had more trips to Disneyland than Mickey Mouse.

“Camping had better be bloody excellent. We’ve never actually done it before.”