I was actually born in Kenya, says Obama

BARACK Obama has admitted he was born in Kenya and ‘you can all go fuck yourselves’.

At a White House press conference, the soon to be former president confirmed he had thoroughly enjoyed his time in office and had been lying about his birth certificate all along.

He said: “Job done. Got to live here for eight years. It is a seriously nice place. I also had a huge plane and a helicopter and I could play golf whenever I wanted.”

He added: “Anyway, enjoy this total shitfest. I’m going to become a professor, or head of some big UN thing.”

President Obama then laughed and went back to watching a marathon session of Salvage Hunters and looking at a brochure for ‘one of those massive Audis’. 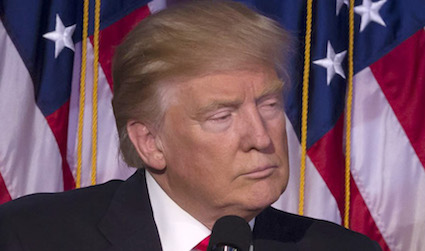 DONALD Trump is bored of politics and wants to do something else now.

The 70-year-old president-elect spent almost 20 minutes pretending to listen to a security briefing from the CIA, before telling the US Army to build a golf course on the moon.

He said: “I get it, I’m the boss. Sure, Congress, whatever. But when do I get an eagle to perch on my arm?

“Anyway, I want to create the most beautiful golf course the moon has ever seen. Beautiful, just beautiful. You won’t believe it.”

Drumming his fingers on his desk, he added: “Okay, what else? Can I pass a law today? Maybe annex some territory?

“Hey, imagine how impressed Putin would be if I defeated Isis this afternoon.