Iran Kicks America In The Nuts

IRAN was last night reassessing its decision to walk up to America and kick it squarely in the nuts.

Early yesterday the middle eastern country snuck up on the superpower, tapped it on the shoulder, applied a swift boot to the testicles and ran off.

But as America bent over double, clutching its groin, Iran and its friends were already questioning the wisdom of the crotch-based gesture of defiance.

According to diplomatic sources, Iran told Syria: "Did you see the size of that fucker? Shit. Shit, shit, shit. Yeah, this probably wasn't such a good idea after all."

One friend of the superpower said: "If there's one thing we know about America, love it or loathe it, you absolutely do not kick its balls."

"Now I'm not saying we'll come out of this unscathed, but I'll tell you what – it'll be the worst 20 minutes of Iran's fucking life."

It added: "Have you not seen Iraq? America's not perfect, but at least we've still got roads, hospitals and thousands of gigantic supermarkets full of people who don't live in their own shit.

"And Iraq didn't even kick us in the nuts." 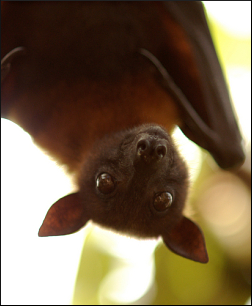 A TEENAGE girl who claimed she found a bat in her 34FF bra is actually having an affair with the flying mammal, friends revealed last night.

Abbie Hawkins, 19, insisted that she had taken off her bra to remove the bat when the pair were discovered half-naked in a cupboard.

However, friends said she had been going out with the young male for a month and that the pair could not keep their hands off each other.

One friend said: "She says that because he's blind it means he really likes her for who she is, but we think he's just using her for sex.

"He hasn't got a job. He just hangs upside down all day and then uses sonar to fly in and out of caves."

The friend added: "It was her birthday last week and all he bought her was a moth."

It has also emerged that Hawkins has a history of romantic involvement with indigenous British mammals after running away with a ferret she met on the internet.

The pair were eventually arrested at a Blackpool hotel while trying to hide a box of stolen eggs.

Hawkins told the police she had found the elongated carnivore in her knickers that morning.