Legally I can kill him, Queen confirms 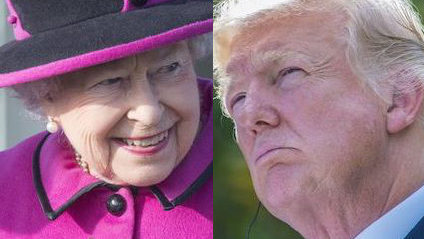 THE Queen has confirmed that when President Trump visits the UK, she can kill him with a sword and nobody can touch her.

Palace staff have assured the Queen that, according to English law, Trump is a subject of the Crown and can, if judged to be damaging the monarchy, be dispatched without repercussion.

She said: “I haven’t made up my mind yet. I might.

“It’s been an awful lot of years hefting the old sword without using it, and who better to christen it on? Just imagine the look on his satsuma face.

“And the colonies would be so grateful they’d have me straight back as their reigning monarch, which solves this Brexit thing literally at a stroke.

“I should do one useful thing before I abdicate, really. And imagine how furious it’d make the May woman.”

Her Majesty added: “I genuinely can’t think of a reason not to. Anyone?”

THERESA May has admitted that she considers all protesters to be a filthy rabble who should be locked up.

The prime minister confessed that mass protests, like yesterday’s in Whitehall, actually make her eager to round them all up.

She continued: “People say that peaceful protest is one of the pillars of democracy, but seeing them with their mismatched hand-made signs makes me itch.

“I know this will surprise everyone because I’ve always come across as a tolerant, listening politician, but deep down I think they’re workshy scruffs who need a good beating to set them straight.

“What’s wrong with sitting in a leather-backed armchair and writing a letter to the Telegraph, if you want your views heard? Or simply emailing your lobbyist?

“I haven’t bothered to find out what they’re protesting about. Certainly something eminently sensible which no right-thinking person would disagree with, or they wouldn’t shout so loud.”

She added: “They make me shudder. They’ll have to go.”