May pulls cracker with herself at EU Christmas party

THE prime minister endured the public humiliation of having to pull a Christmas cracker with herself at the EU’s Christmas party in Brussels.

After failing to find any other European leaders willing to take the other end of the cracker, May briskly pulled it herself, pocketed the toy, placed a red paper crown on her head and pretended to be absorbed in the joke.

An EU source said: “She tried to join in the conversation over lunch but most of it was in French or German so mainly she just smiled as if she understood.

“After the meal she went to buy a drink but she’d only brought sterling and it was in Euros so she had to make do with a glass of tap water.

“Mainly she sat by the side of the dancefloor nodding to the music and pretending she was getting texts in case anyone was watching her. Which they weren’t.”

May said: “In fact pulling the cracker without aid was a good example of British resilience, eliminated risk and secured a miniature magnifying glass for the future.

“Also, my precondition for joining a conga is I must be leading it.”

I will end you, cat tells Christmas tree 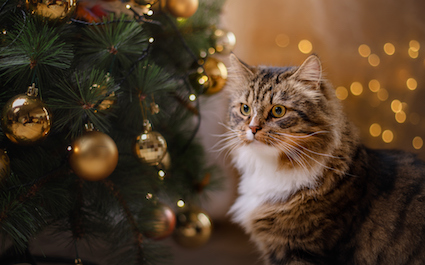 A CAT has vowed to destroy the six-foot Christmas tree currently in her living room.

Despite agreeing a truce with her owners, six year-old tabby Anya launched a surprise attack at three o’clock this morning.

Owner Nikki Hollis said: “I can only assume the vet that put down her father was green and bristly with a small plastic fairy for a hat.

“When I got up this morning she was patiently pressing a sparkly deer we got from John Lewis into the depths of her litter tray, so that’s not going back up.”

Anya said: “When we first met I was play-fighting with it, like I do with anything in the house, from bits of fluff under the sofa to people’s ankles. But then it deliberately fell over and scared the bejesus out of me.

“I get enough shit from the hoover around here, so the last thing I need is that big sparkly bastard giving me grief.