US Teenager To Climb Everest For Crafty Ham Shank

Thirteen year-old Jordan Romero will set off from Kathmandu equipped with breathing equipment and hand lotion and, in order to save weight, is hoping to pick up at least one discarded jazz mag in the hedges of rural Nepal.

Romero said: “I come from a large family – six siblings, grandma and two aunts living with us – so it can be difficult to fnd the time and space I need to pleasure myself right the way to the end.

“I was watching a documentary about Everest and thought ‘I bet a guy could really go to town on himself up there without interruption’.”

The last, unsuccessful, attempt was made in 1997 when New Zealander Wayne Hayes admitted defeat at 25,000 feet due to a mixture of bad weather and permafrost obscuring his copy of Knave.

Hayes said: “Jordan’s main challenges will be the terrible loneliness up on that magnificent range, as well as trying to get even a doughiest of semis when it’s minus 35 outside.

“But he does have the advantage of being a teenage boy and so he should be able to maintain the necessary firmness even if he’s being attacked by a wolverine.”

Comparing his task to ‘ejaculating into the face of God’ Romero added: “I hope I’m an inspiration for other teenagers who want to shuffle their deck in challenging locations. Maybe one day my son will set foot on Mars before nipping behind a massive boulder for a portion of beef jerky.”

Bill McKay, who retired from moutaineering only last year, said: “I wish him the very best of luck, but my God he’ll have to work fast.” 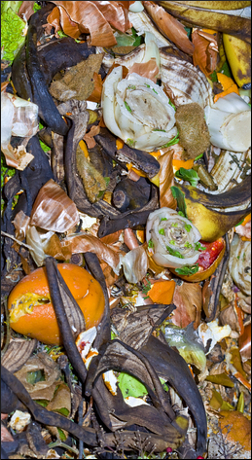 A PLAN to install slop buckets in homes and offices has raised concerns that being environmentally-friendly could start to become a bit of a pain in the arse again.

Environment secretary Hilary Benn boosted Labour's election chances yesterday by pledging to fit every building in the country with a festering bucket of left-over salmon that will stink like a Frenchwoman's gusset by the middle of August.

But according to recent surveys most consumers believe buying expensive goods with pictures of trees on them is a valid contribution and have no intention of living next to a swing bin full of rancid cheese and luke-warm Fanta.

Architect and father-of-two Tom Logan said: "I don't mind buying the rainforest biscuits or the dreadful sandals made from reconditioned cat uterus.

"I've even gotten rid of my telly and now take great satisfaction in telling people that I watch films and the news on my laptop.

Teacher and Ecover washing up liquid owner Nikki Hollis said: "I firmly believe we must safeguard the planet's natural resources for future generations, as long as it doesn't involve too much fucking about.

"I just hope the government doesn't raise the moral obligation bar to a level where you have to put yourself out a bit, for example by buying old fashioned nappies that you have to wash the turds off, or take glass bottles back to the shop for a refund like one of the Bash Street Kids."

Mr Benn said: "There's some lovely stuff right at the bottom. I think this used to be a gherkin."