AL-QAEDA chiefs admit they have slipped well below ISIS in the world’s evil league table.

The terror group’s slump in form has seen them overtaken by ISIS, Boko Haram, Russia, North Korea and Network Rail.

And while the terror group used to have its pick of promising young radicals, it is increasingly reliant on unpaid interns using it to pad CVs before moving on to lucrative martyrdoms with more prestigious groups.

Al-Qaeda leader Ayman al-Zawahiri said: “A drone circled overhead yesterday, carrying a full payload of missiles, but the moment it recognised us it flew off.

“I doubt we’ll even get invited to Kim Jong-un’s birthday this year.”

One Al-Qaeda intern said: “I spend the day cold-calling, asking people if they’d be interested in some terror. People are polite but they’ve always got their evil needs covered by another provider.

“I wish I’d taken that traineeship with British Gas.” 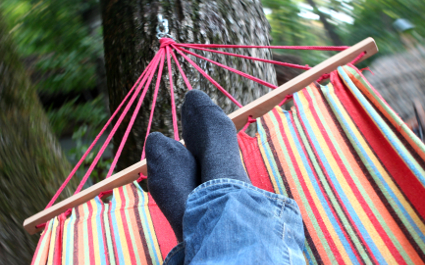 A MAN who used a hammock has described it as the least relaxing experience of his life.

Tom Logan, from Bristol, used the hammock while staying at a five-star resort in the New Forest and revealed he still wakes up screaming.

He said: “It was strung between two trees and from the moment I clambered in, this contraption lurching drunkenly beneath me, my heart rate was through the roof.”

Logan said he spent  20 minutes lying absolutely motionless before a waiter handed him a daiquiri and it got much worse.

He added: “It proved impossible to get the drink to my mouth without shifting my weight so dangerously I risked being catapulted into the air or bound up like a caterpillar in a chrysalis.

“That was me for more than an hour, until I got a cramp and sat forward suddenly, spilling sticky booze everywhere and dumping myself on the floor with one leg still caught, like a trapped poacher.

“I eventually manged to free myself by clawing at the bare earth at which point I got back in and it started all over again.”