You are with SodaStream or you are with the terrorists, says Johansson

SCARLETT Johansson has defined the modern world as a battle between SodaStream and evil.

The actress quit as an Oxfam ambassador and accused the aid organisation of blocking SodaStreams campaign to bring cheap, homemade fizzy drinks to millions of poor people.

And she insisted that SodaStreams factory in the occupied West Bank was humanitys last, best hope against ugly, extremist charities.

Johansson said: Unlike Oxfam and terrorism, the SodaStream farty noise makes me giggle every time.

When Im all hot and sticky, nothing cools me down like SodaStream. I love to giggle and make SodaStream while I prance around in just my underpants.

Oxfam hates freedom and refreshment and does not look good in underpants.

As long as he has a fresh water supply and no-one bulldozes his house. 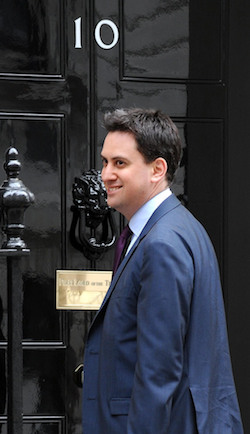 LABOUR is to change way it elects its leader in the hope it will result in the election of a leader.

The party has drawn up radical reforms after its last two leadership elections went horribly wrong.

Ed Miliband, the winner of the most recent ballot, said: After the Scottish person, we hoped we would learn from that ghastly mistake. But no.

My campaign started out as a practical joke on my brother.

But then I realised I could help him by being the person you were obviously not supposed to vote for.

No-one was more horrified than me when the unions gave me their support. As I stood on the conference stage, basking in my victory, I was thinking, oh dear god, this is awful.

He added: Now, because of the Conservatives, Im probably going to win the general election and embark on an utterly disastrous premiership.

But recent history tells us that will not be enough to prevent something like me happening again and again.

By introducing one-member-one-vote the party can be sure it will always be led by a right-wing middle class Englishman.