A COUPLE inviting people to only the evening bit of their wedding have revealed they just want the place to look busy.

Nikki Hollis and Martin Bishop have asked people they actually give a sh*t about to join them for the whole day, but made a separate list of people to fill up the dance floor later.

Hollis said: “There’ll be a natural drop in attendance throughout the day as the old codgers get tired and go home, but we don’t want the evening reception to look thin in the pictures so we’ve invited a load of also-rans to make up the numbers.

“There’ll be a few people I haven’t spoken to for years who are surprised to get an invite, but they’ll think I’m trying to reignite our friendship and be flattered enough to come.

“I’m not, of course. I’ll go back to ignoring their Facebook messages the moment my honeymoon begins.”

Evening invitee Emma Bradford said: “I’ve always hated Nikki but I’m happy to get p*ssed for free and make a total embarrassment of myself dancing to ‘Oops Upside Your Head’ before throwing up on the dance floor.

How are you using your phone to ruin nights out? 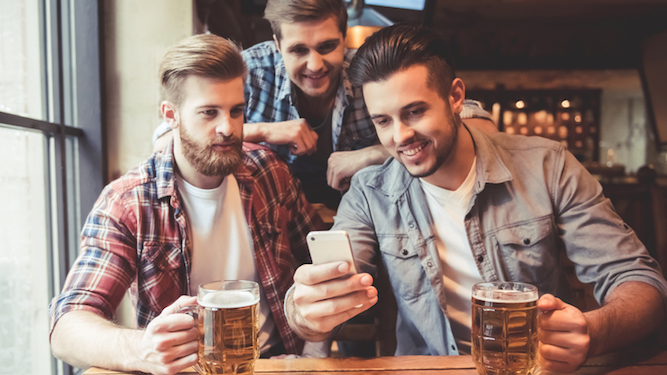 OVERUSING your phone can ruin an evening, unless all your mates are tw*ts who only want to obsessively check their emails too. Here’s how make a sociable night totally pointless.

Secretly film everyone the moment they get drunk so you can post it on social media. It’s like being a spy – a spy who is a massive tw*t and on a secret mission to be the most irritating b*stard of all time.

People like nothing more than spending most of the night with a forced grin on their faces as you take photos every four minutes. Aim to disrupt every interesting conversation as you duplicate the other 15,286 near-identical pub photos you’ve taken.

Google the answer to every unknown

Looking up a disputed fact is fine. What is not is failing to remember what year A-ha’s ‘Take On Me’ was released then dragging everyone into a mindless YouTube hole so that by 11.20pm it’s time to go home and you’ve wasted an entire evening making everyone watch a tiny TV.

Leave your phone bleeping in the middle of table

If you’re not one of those people who’s always on your phone, try being the other kind of prick who keeps it on the table bleeping like a life support machine.

Hijack the group into playing FaceApp whereby they think they’re having fun but they’re really just trapped in a sh*t hall of mirrors laughing hollowly at their own faces.