THERE was unconfined joy as an ex-banker relocated from London to the countryside only to see his venture fail within six months.

Nathan Muir, 33, traded his life and six-figure salary working at Goldman Sachs to open a tea room in rural Oxfordshire – a dream he had had ever since reading an Sunday Times magazine article in 2015.

However, Muir was disappointed when locals failed to flock to his establishment, Muir Tea, Vicar? and pay £4.95 for a cup of decaffeinated damson tea in an authentic rural setting.

Muir has been forced to move back to London and rejoin the ‘rat race’ he vociferously attacked in a Guardian article explaining how his “downsizing” had afforded him a true sense of rustic, anti-materialistic spirituality.

Muir admitted he will have to go back to screwing over clients to maintain the £2000 rent on his one bedroom flat in Wapping.

Tom Logan, a childhood acquaintance of Muir said: “I cheered so loudly my roof nearly fell off. Nathan has been a priceless twat since the age of about five and finally his twat chickens have come home to roost.”

Nikki Hollis, a former girlfriend of Muir said: “When I heard the news I did an authentic country dance around a maypole.” 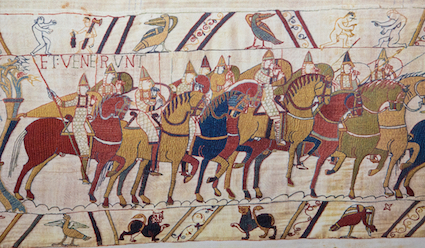 A BREXITER believes the Bayeux Tapestry is bollocks because there is no way the Normans could have defeated the British.

After France offered to lend the famous artwork to the UK, Leave fanatic Nikki Hollis questioned whether French cowards could really outfight British soldiers who are the best in the world.

“The moment the French jumped out of their boats our brilliant archers would have started mowing them down. Probably Merlin the wizard was there too, shooting fireballs at them.

“I also find it hard to believe Harold was shot in the eye. An experienced knight would have pulled his visor down before skewering loads of Frenchmen on his massive lance like a kebab.”

She added: “Plus there’d have been early Spitfires strafing the beaches with their arrow machine guns. It’s disgusting that liberals unquestioningly accept a distorted version of history just because they hate Britain.

“I reckon the French came over, took one look at our lads and legged it. Once they were safely back in their chateaus they just made up the whole Battle of Hastings to not look like wankers.”