THE British suburbs may seem a sexless desert of women in gardening kneepads and men washing cars, but they are actually red-hot pits of depravity. These are the signs:

There’s only one reason for a garage conversion: a sex den. One that’s outfitted with stripper pole, love swing, hand-cranked three-dildo f**k machine and four mirrored walls. That’s what they’re doing in there. Never accept the loan of a drill. You don’t know where it’s been.

They’ve all got dogs and they all walk them religiously, but Thursday’s when it happens. That’s the day you’ll see them all, young and old, heading to the picnic benches in the park for their weekly outdoor sex show. All standing round wanking frenziedly, then going home as if they’re perfectly respectable and it never happens. But it does.

Every fourth house is an online brothel

The internet is swarming with OnlyFans housewives and they have to live somewhere. While the kids are at school they’re upstairs in panties logged on to some bloke in Malaysia. Check the wifi as you go past. If it’s the default router name that’s a sure sign.

The centre of the street’s LGBTQ activities. Turning in their driveway brings the homeowner out immediately, ready to perform any number of lustful acts, which is why they’re furious when you drive away, and bang angrily on the window whenever they see your car after that. Because they’re gagging for suburban sex.

The wanker's guide to chatting up the new barmaid 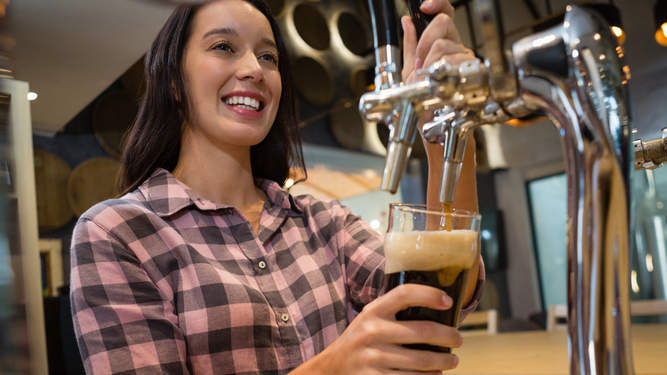 THE new barmaid has been ignoring you so far but she’s just playing hard to get. Here’s how to use your charms to win her round:

Don’t make it too subtle, like saying she has nice hands or some nonsense like that. She might think you’re a homosexual. Just wait until she turns her back to put a glass in the washer and loudly shout ‘Nice arse, love!’ Job done, and she’ll be utterly flattered.

Talk to her about the telly

I don’t mean thoughtful dramas or the latest foreign Netflix sensation with subtitles. I’m talking about stuff that everyone is interested in, like football. Start banging on about the Arsenal game last night and get so angry about the f**king referee that you end up spitting half-chewed pork scratchings all over the bar. She’ll love your passion.

Tell her to smile

Take it from me, when a bird’s looking down in the dumps nothing cheers them up more than being told to look happy. It lifts their spirits immediately, especially if you leer and add something like ‘you look well fit when you smile, sweetheart’. Those gritted teeth are definitely a grin of pure delight.

Ask her about her life

Unlike you, she’s got a life outside of the pub, so ask her some questions about it. Then, as soon as she starts talking, interrupt her with an incredibly tedious anecdote of your own. She’ll be so overwhelmed with fascination and desire that she’ll have to go and clean the toilets to stop herself from snogging you there and then.

Use the old ‘while you’re down there’ line

You’re at a table with the lads, she comes over to collect some glasses, drops a crisp packet on the floor and bends down to pick it up. That’s when you deliver the time-honoured line, which she’ll think is hilarious. If she doesn’t, she probably one of those feminists who doesn’t like blokes anyway. And if she calls you a wanker and has you barred for life, just try your luck at another pub.