Parents realise son planning to keep living with them after lockdown

THE parents of a 29-year-old man who moved back home for lockdown have realised he has no plans to move out after lockdown.

Wayne and Theresa Hayes urged their son Liam to leave his flat in London and stay at theirs for the duration in March, but now fear that he is living with them permanently.

Theresa said: “We couldn’t bear to think of him down there in London, in a shared house with frontline workers, so we told him to come home so we’d know he was safe.

“But I came home the other day and he’d had his bedroom redecorated and a TV put on the wall, then he asked if we wanted to ‘go threes in on a breadmaker’.

“I asked how he’s affording his place down there and he mumbled something about ‘short-term rent savings’ and it transpires he’s moved out and put all his stuff in storage. Then he asked when Dad could go and pick it up.

“Does he think parental love is unconditional or something? We don’t want to have sex in the living room so he walks in on us and then has to leave forever. But if we have to, we will.”

Liam Hayes said: “I’m not going to be here forever, I just have to wait until this whole thing blows over and then I’ll be ready to go in two to three years.” 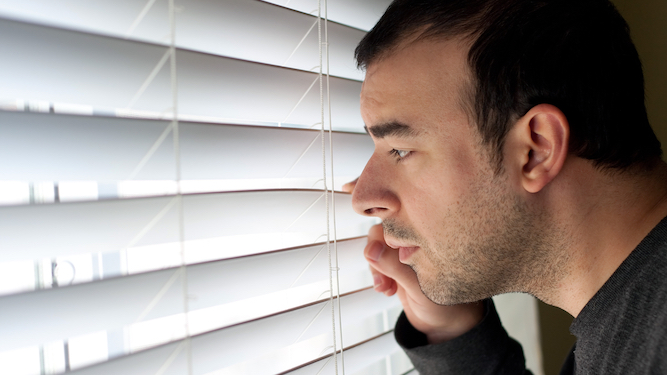 A MAN is watching out for objects 400 times smaller than can be seen with the naked eye so as not to catch coronavirus.

Tom Logan was warned to stay alert for COVID-19, the vanishingly tiny virion recognisable only by specialists using powerful electron microscopes, and is wheeling around suddenly in case it is sneaking up behind him.

Holding a jeweller’s loupe and a miniscule butterfly net, he said: “The Government advice to stay alert is absolutely spot on. That’s why I’m keeping my eyes peeled for this microscopic genome at all times.

“You see this grain of sand? Could be thousands on there. Tens of thousands. Even a dust mite’s like Ayers Rock to them. So staying alert is just common sense.

“If anyone catches it, when they’ve had that warning, well, can’t really blame it on anyone else can they? Not nearly alert enough.”

Booker then shielded his eyes from the sun, scanned the horizon, and satisfied there was no coronavirus in the area, returned inside.