LAST week everyone was pretending to write a novel. This week they’re all pretending to be online learning. What should you claim to be enrolling on?

All those twats on Insta are coining it in for doing nothing, so you presume this is mainly a course in trout-pouting for the camera. Quit after one class when you realise there are algorithms and real work involved, including a case study on Joey Essex.

It’s the only thing you learnt about at school, so in a sense pointless. But it makes you feel clever to still get six out of six on the fate of Henry VIII’s wives via the ‘divorced beheaded died’ rhyme, which keeps your mind off your gaping loneliness for 15 minutes.

Facebook has advertised a dentistry course to you, so it must be legit. Sign up hoping you’ll be sent samples of that lovely pink liquid to gargle with or a canister of gas for fun during lockdown, then retreat rapidly when you realise to be a dentist you’ll have to start flossing.

You get unprecedented access to top chefs from Great British Menu and their watchalong courses use up store cupboard ingredients such as monkfish tails and pink peppercorns. Politely withdraw when you realise that your replacement tinned sardines taste like metal.

Time to make up for the stuff you neglected at school because you were busy locking the supply teacher in the cupboard. But at least back then you had the chance of going to actual France and snogging someone called Pascal in La Rochelle. Bin it off and explore French culture in other ways, such as wine and arthouse films with boobs in.

Finally something useful. But you still quit halfway through because it sounds like hard work and you’re kind of ugly. 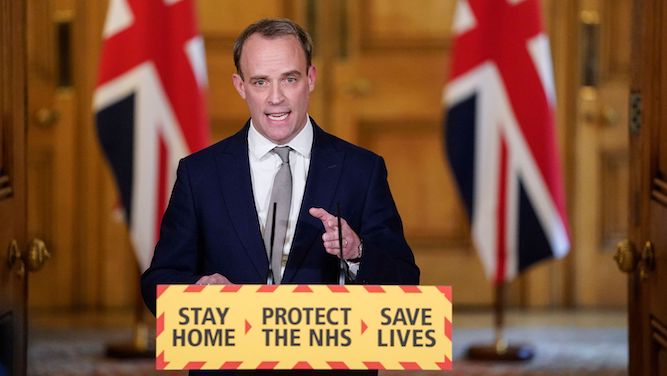 THE government has explained that using EU-procured medical equipment to save British lives would be high treason punishable by death.

Dominic Raab told press that he had refused to take part in any EU procurement schemes because he loves his country and patriotism is not a dirty word.

He continued: “EU ventilators? Pumping filthy garlic-and-bratwurst stinking EU air into good British lungs? I couldn’t sign off on that with a clear conscience.

“Especially as many of the sick are elderly and voted Brexit. How would they feel, waking up, being told that they owe their very lives to pure evil?

“I didn’t want to be executed at the Tower and my head displayed on a pike, so I pretended I’d lost the email about four times, ordered everyone to lie about it, then ordered them to lie about the lies. I think we can all agree that was the responsible thing to do.”

Joe Turner of Lincoln said: “Brexit means bloody Brexit, and we all knew full well we wouldn’t be taking part in EU-wide procurement schemes for equipment to fight a pandemic when we ticked that box in 2016.”