A CHRISTMAS tree in the Daily Mail newsroom has died within 45 minutes of its arrival.

The five-foot pine was belatedly bought with money from petty cash after editor Paul Dacre declared it was time to ‘inject a bit of cheer into the place’.

However the seemingly-healthy tree rapidly withered and died once moved into position between Richard Littlejohn’s desk and the ‘celeb nip slip’ team who are manacled to their desks.

A source said: “It wasn’t as if the spines just fell out. The whole thing sort of withered and turned grey.

“It’s limbs went flaccid and the baubles dropped off and rolled across the floor.

“It’s almost as if the life force was being sucked out of it. A similar thing happened when we got a cheese plant in 2008, and indeed I once saw it happen to a sparrow that flew in through the window.

“I was putting the poor little thing in the bin when Dacre told me he wanted it for his sandwich.” 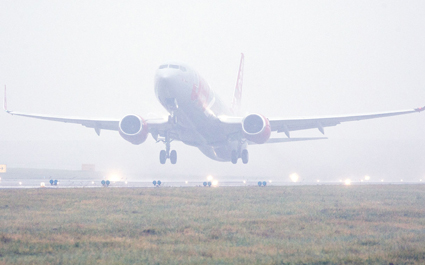 FOGGY airports are the EU’s latest plan to hinder Brexit, it has been claimed.

Leave voters insist that the bad weather disrupting flights was sent by Brussels as punishment for Britain seceding from the European superstate.

Fellow Brexit supporter Donna Sheridan said: “The EU has a load of wind farms near the Heligoland Bight pointed right at Britain. When they want to flex their muscles they switch them on and send us their nasty foreign weather.

“The mainstream press won’t tell you about it, you have to seek out brave independent media like the Mail Online comments section.”

Roy Hobbs, from Stafford, said: “Nobody I know voted to be stranded on a runway at Heathrow for four hours, but as usual they were ignored by the faceless Eurocrats in Brussels.

“It’s time to take back control of our weather.”

Sheridan added that if Jean-Claude Juncker deliberately thwarted a white Christmas it would be grounds for war.