PUBLIC figures that never shut up have been given their own TV channel where they can talk endlessly about being silenced.

The marginalised journalists, politicians and celebrities had previously only been able to speak about having no voice in newspaper columns, social media and regular slots on Question Time.

GB News viewer Nathan Muir said: “Wokeness has gone mad. When Andrew Neil voluntarily quit the BBC, all he had was The Daily Mail, The Spectator and his Twitter account to speak through. It’s not right.

“So I’m glad there’s finally a television channel devoted to him and those like him where they can make shows that are totally unbiased yet still strangely resonate only with perpetually furious gammon like me.

“If I were to think a bit harder I might suspect something doesn’t ring true about a channel funded by international investment firms being the voice of the ordinary British person.

“And I might also wonder whether people corralling themselves into one place where they can easily be switched off would be a worse way to get their voices heard then appearing across a wide range of media outlets.

“But I don’t like thinking, so I’ll just enjoy the puce-faced shouting instead.”

Ate soup with a fork, and five other things the Queen told Biden Trump did 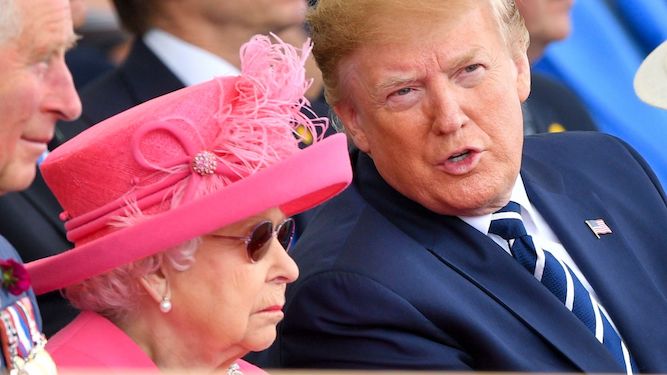 CONVERSATIONS with Her Majesty are usually strictly private. But in her meeting with President Biden she asked for these nuggets about his dickhead predecessor to be revealed:

When he ate soup with a fork

During a state banquet Trump spent ten minutes eating pea soup with a dessert fork while the Queen looked on, shaking with suppressed laughter. After realising his mistake he switched to a knife.

When he pissed in a Buckingham Palace laundry closet

Ignoring directions to the loo, Trump opened a cupboard full of clean, fresh white towels and just unzipped and let go. He then wiped his hands on a towel and barked at Prince Edward to ‘get that cleaned up’ before continuing to eat asparagus spears with his fingers.

When he wrecked her lawn with a helicopter

Visitors usually arrive at Buckingham Palace by car because there’s a main road right outside. Trump rocked up in a helicopter and left oil marks and craters on the bowling green. He promised to pay for all damages then didn’t.

When he hit on Princess Anne

That video of Princess Anne backing away from greeting the small-handed prick makes even more sense when you learn that he made a pass at her. The press didn’t read anything into Anne’s recoiling horror because that’s typical when meeting Trump.

When he fed the corgis chocolate

Gifts for hosts grease the wheels of diplomatic relations, unless you’re feeding a half-melted Hershey bar to the Queen’s pedigree corgis while saying ‘They love real American chocolate, huh? Huh?’

The film of him drifting about like a drunk toddler while inspecting the royal guard doesn’t even scratch the surface. During photos with the Queen he would plonk himself right in front of her like an idiot bodyguard, and would have to be shifted by the same palace handlers charged with removing Prince Andrew from public.