A FRESHER at the University of Sussex whose high-school girlfriend has just started at Newcastle University is certain they will stay together.

18-year-old Joseph Turner said he is unperturbed by the 350 miles between them and has faith their relationship of four months will be stronger than ever.

He said: “We’ve been inseparable ever since our A-level revision dates. We’re soulmates and neither of us can imagine a scenario where what we want changes. I mean, how different can university be to school?

“I’m confident that I won’t have much on for the next three years and neither will she. It’s not like we’ll be meeting loads of new, attractive people and going out getting wrecked with them where anything could happen.

“After all, it’s not like we settled, just because we’re from the same small town in Warwickshire and everyone else in our year had already coupled up. It’s true love.

“I can’t wait for the Zoom call with her tomorrow night. She’s cancelled tonight’s already. Which is actually quite convenient because there’s a massive party this blazing hot girl from the next building invited me to.”

Girlfriend Sophie Rodriguez said: “I’ve been here three nights and got off with a different lad every night. I think we talked about having an open thing?” 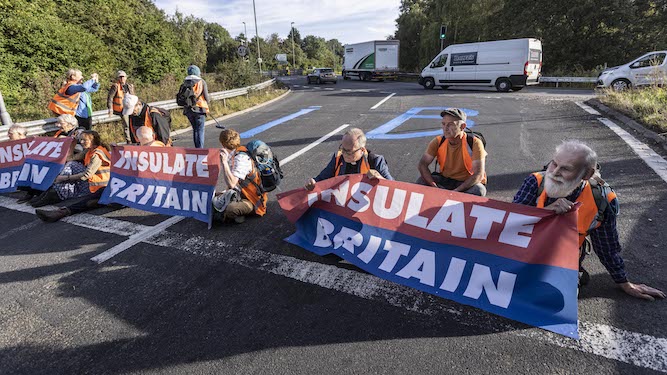 EXTINCTION Rebellion has issued a formal apology and disbanded after having some sense shouted into them by an angry van driver.

XR offshoot Insulate Britain realised what pricks they had been after the 20-minute tirade from Will McKay at junction 18 near Rickmansworth and have promised not to impede climate change in any way.

McKay said: “What did I say? I told them they were just causing more pollution with this queue of cars which I bet they’d not thought of, and they’d made everyone hate them and more likely to do climate change out of spite.

“I added that they were a bunch of f**king pricks. And I think that really hit home.”

Protestor Jules Cook said: “I’d never heard such refreshing common sense, coming as I do from the liberal elite and attending a woke echo chamber university.

“Extinction Rebellion is over. We all plan to get honest jobs doing worthwhile things such as plastering, like our new hero Mr McKay.”