I kissed an American girl, and four other lies teenage pricks told about their holidays

TEENAGERS holidaying with their parents spend all day working out the fortnight-long lie they’ll tell their mates. Including these elements:

Nationality and ethnic identity varies, but the kid who has talked to three girls ever always returns with a tale of whirlwind romance where they play a modern Casanova. Half-believed by everyone else secretly hoping a British accent can overcome a dogshit personality.

A classic desperate-for-attention you-can’t-prove-I didn’t ploy, but the story doesn’t stand up to scrutiny. Was Tom Holland really holidaying in an all-inclusive on the Algarve this summer? And why would he be so generous with his time to someone who’s a twat?

Had a near-death experience

One kid always returned with stories of a fortnight as Indiana Jones. They fought off a lion on safari, surfed down a rockslide, got involved with a local gangwar and became their chief assassin, etc. In reality, they were sitting in a caravan park in North Wales.

Made an incredible new rich friend

They just got chatting to this boy who’s the heir to the BetFred millions and spent the whole time in their penthouse suite in Dubai playing the latest VR video games and riding in helicopters. They’re going again next summer. To which the whole maths class responds with synchronised chinrubs.

Apparently the TeenZone of Butlins in Bognor Regis is full of crazy wild kids stealing booze, bonging weed and breaking into swimming pools at night before fleeing from the pigs. In reality the most daring thing they did all holiday was return their pedallo late.

Despite spraining an ankle doing parkour in PE, one kid outlines a half-term spent like Bear Grylls. They bungee-jumped and sky-dived and swam with dolphins, so no they’re not even bothered that you threw their bag on the roof of the theatre block. So there. 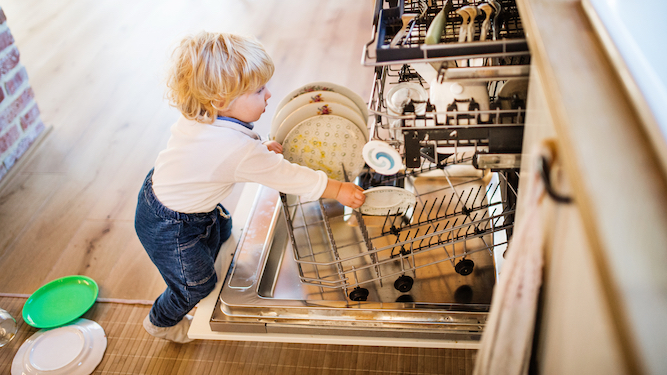 KIDS been quiet for five minutes? Cause a massive childcare emergency by attempting to do one of these simple things:

Go to the toilet. The moment you’re poised to void you’ll hear a scream outside which turns out to be spilt glitter.

Pour yourself a nice cup of coffee. Take one sip then be called to come and wipe an arse.

Log onto Zoom. A child climbing on the bed and pulling a moon would’ve gone hilariously viral 18 months ago. Now you get a verbal warning.

Attempt to actually bloody cook instead of sticking pizzas in. The explosion of a two-litre bottle of Coke dropped by a 12-year-old behind you will ruin everything.

Ever wondered why parents live in filth? Because every time they start cleaning, some tiny bastard will spill a drink, break a bowl or piss in a shoe.

Tuck into some of your secret chocolate stash, only to hear the haunting cry ‘Mum, the goldfish is out of his bowl’.

Put a film on. Immediately a snack is required, a fistfight has broken out over Lego and the toddler has stuck a grape up her nose.

Unwind and slip into a nice hot bath, and instantly a child will take a crap in the toilet next to you. Even though you have a downstairs toilet.

Pour a glass of chilled wine. Sip, close your eyes, relax, open them to the sight of a child bent double asking ‘Mum, is my bum red? It’s sore.’

The exact moment your head hits the pillow at night sends out a signal to kids that says, ‘I am available to tend to your needs now’.

Do anything that is not boring drudgery at any f**king point of the day or night. Invites and triggers disaster.