Why sexually charged love-hate relationships are bollocks in real life

IN films, when two hot people hate each other, they often realise they’ve been in love all along! So why does this bullshit scenario occur so rarely in real life?

You avoid people you hate

In films, people who detest each other are thrown together to stop a Godzilla or complete one final spy mission. That’s never going to happen with you and Colin in HR. Instead you’ll simply avoid getting into a lift alongside him and stay away from his preferred lunch spots in case the twat talks to you. And that’s your chances of a passionate love-hate f**kfest crushed.

In real life, the people you hate are not hot. The bastard elderly neighbour who throws crisp packets over the fence claiming they’re yours doesn’t have the chiselled pecs of a Guardians of the Galaxy Chris Pratt. They’re unattractive, and horrible – so why would it even cross your mind to fancy them? Especially when the annoying woman at work looks more like Sybil from Fawlty Towers than Cybill Shepherd.

Your friends have got better things to do than spend their days plotting ways to make you realise that some arsehole is actually your true love. If they even suggested it, you’d think hooking up with someone you hate is f**king stupid idea. That’s because it is.

You’ve got half a brain

Anyone who isn’t a bloody idiot would prefer to go out with someone nice from the get-go. Why would you waste your energy chasing after, say, the dickhead flatmate who keeps eating your Ben & Jerry’s in the night and then lying about it to your face? Even if there was hidden passion, how could you ever trust them after what they did to your Chunky Monkey?

Life isn’t a Hollywood romcom. Bad people rarely change and good people who’d make lovely partners stay single indefinitely. Even if your brother’s dickhead mate is your secret soulmate, life isn’t setting you up for a wonderful, fiery romance. He lives 130 miles away in Cleethorpes, which is no bad thing because he’s into Jason Statham movies and Britain First. 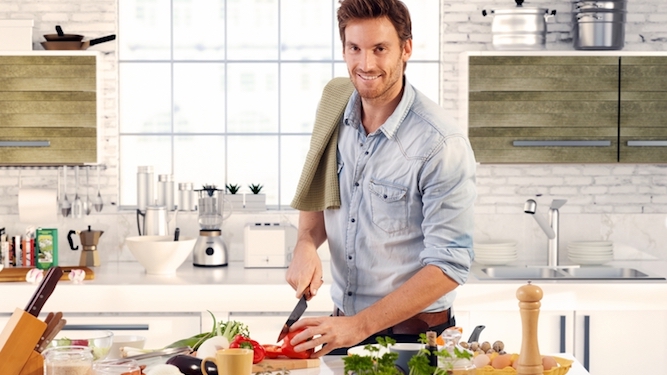 MEAL kits are a great way to make cooking more complicated and persuade the opposite sex to f**k you. Here’s the lowdown on which ones are most likely to lead to coitus.

Old El Paso is the Ray Winstone of meal kits – it’s the daddy, and respect is due. But will it help your quest for intercourse? Yes, insofar as it’s likely to be more edible than the slop you usually make, but ‘no’ in the sense that Mexican food is too hazardous for food-based sex games. The ‘fiery fajita’ version is bound to end up somewhere delicate, making you terrified you’ve permanently cauterised the nerve endings in your knob.

Enjoy the unchallenging mediocrity of a high street chain restaurant in your own home. Wagamama and Nando’s are already perfect locations for bang average dates, so what better than enjoying the same experience cheaper, minus a mood-killing Tube journey back to your flat? But beware of looking like a cheapskate. As you serve up forgettable chicken wraps you can always say ‘I have the meal kits delivered by Fortnum & Mason’ if your date is a bit thick.

If the person you’re trying to bone is on the classy side, M&S is the way to go. Get one of their recipe boxes for two, and proudly tell your date where you bought it. You’ll exude such status and wealth they’ll probably do everything – including sex acts you thought were urban myths – before you’ve even taken the film off the salmon en croute.

Home-delivered meal kit sets are a fairly recent development, but they present exciting possibilities. In the internet age, you could theoretically use apps to have food, drink and sex partners delivered directly to your door – meaning there’s no reason to ever leave the house. Buy some fake tan online so you don’t look like some creepy, sun-deprived sex hermit when your shag comes over.