Do bacon next, scientists told

SCIENTISTS who grew a burger in a lab have been ordered to get cracking on bacon next.

The synthetic burger was sampled by food critics who declared that it was good enough for Northerners, but was not as good as those gastropub ones that come with a little canister of chips.

Bacon fan Wayne Hayes said: “This is a good start but the holy grail is obviously bacon.

“If I can buy a big bucket of chemicals and make bacon happen whenever I want I’d be so grateful I might start going to church again.”

Most seaside donkeys on smack 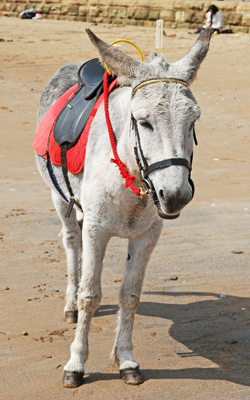 BRITAIN’S beach donkeys are increasingly addicted to heroin, it has emerged.

A new report on the decline of seaside towns highlighted spiralling hard drug use, especially among the donkeys whose job it is to carry overweight children up and down the beach.

Donkey Tom Booker said: “Heroin is the only thing that makes my life tolerable.

“You can make decent money hauling kids, and you need something to cushion the psychological effects of standing hoof-deep in sewage all day.

“After smoking some brown the lapping of the sea on the shore becomes strangely soporific, and you don’t notice the litter.

“But you can’t overdo it or your ears droop which makes you look ill.”

Booker lives in a ‘smack stable’ near the sea with eight other heroin-addicted donkeys and a homeless man who used to be in the army.

He said: “There are needles and dung everywhere. Everyone’s always biting each other for no reason.

“I’ve worked beaches from Weston to Great Yarmouth and most of the donkeys are on gear.

“I got busted for possession last week but the police had to let me go because I was too big to fit in the car.”