THE Liberal Democrats have unveiled radical plans to reduce Britain's carbon emissions, including a new generation of cars that unleash the remarkable power of jam.

The party, popular with academics and mental patients, has declared war on petrol and vowed to hunt down and destroy the last drop of the world's favourite fuel by 2020.

Environment spokesman Chris Huhne said: "People say to me, 'oh no Chris, how are we going to get to work if you've killed all the petrol?' Fear not, I tell them, for I have harnessed the power of jam!"

Describing unleaded petrol as the "Khmer Rouge of high octane distillates" Huhne insisted the world's future energy demands could be met by boiling up a lot of soft fruit.

Huhne said the party had bought a 1998 Citroen Saxo which it hoped to convert to blackcurrant jam. "Blackcurrant is the easiest to work with, until we can find a way to stabilise raspberries," said Huhne.

"This is just the first step. I've been drawing sketches of huge triple-decker buses with on-board cinemas and swimming pools that run on low fat Nutella. And what about a jetpack filled with lemon curd?"

He added: "The only possible drawback we can envisage is an uncontrollable plague of gigantic killer wasps." 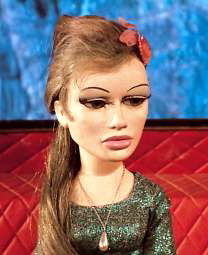 AMY Winehouse fans should stop buying her records because she is a croaky voiced skank who sounds like a goose being forced arse first into a trombone, her grandmother said last night.

Phyllis Winehouse, 74, said music lovers should mercilessly chase her granddaughter through the streets and pelt her with dog poo and kebabs to make her shut up.

But Ronnie Winehouse, an uncle, said the only way to stop the singer from her honking was by pulling her lungs out through her own mouth and then throwing them on the floor for dogs to eat.

Ronnie’s brother Pete, known in the family as uncle Pete, said everyone in Britain should shout “shut the fuck up you stupid cow” at the same time so that he would not have to listen to her going on about how much she hated her success.

His daughter Zoe, who is also the singer's cousin, said people should scrawl obscenities on her house, not because her singing was awful but because she was “a rich bitch” who was “totally up herself”.

Hugo Rifkern, an ex-boyfriend of the singer, said he just wished she would hurry up and die of horse drugs “or whatever else it is she is taking these days”, so people would stop asking him how she was.

Roberta Pillen, who cleaned for the Winehouse’s for a few months in the late Eighties, said she would like to pull all the singer's ridiculous hair out with her Hoover, but very slowly.

And Bob Justice, who once stood behind Winehouse in a queue at the off-licence, said he would like to strangle the singer with his bare hands, snap her head off, bite out her vocal chords, spit them on the ground and dance on them, using his feet.