O2 chaos as labrador dies in its wheel

THE O2 network collapsed over the weekend following the death of the labrador that powers its central hub.

Sparky, the company’s core dog, expired on Saturday after eight solid years of running inside a giant drum with an O2 employee holding a boiled pig’s ear just out of its reach.

As the network collapsed, representatives rushed to find a dog breeder that was willing to take O2 gift vouchers instead of cash.

An O2 spokesman said: “Media reports of widespread anger have been exaggerated. In fact not a single customer called or texted to complain.”

But services were disrupted again on Sunday when the replacement labrador slipped on a puddle of Sparky’s sweat, leaving the animal careering around inside the rapidly-spinning drum, barking in terror.

“A husky would have been a much better choice, they’re agile and energy-efficient, you can run one for six months on a single bucket of blubber.”

A similar problem hit the T Mobile network in 2009, when one of the turtles harnessed to its underwater centrifuge lost a flipper. 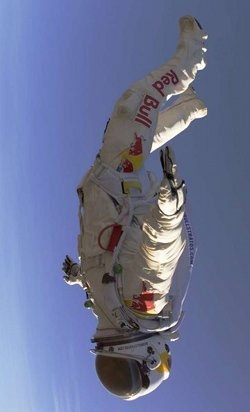 FELIX Baumgartner lost control of his bladder less than a second after he began his record breaking skydive from the edge of space.

The Austrian became the first person to break the sound barrier unaided while pissing himself with abject fear the entire time.

Sensors picked-up the first rush of urine when Baumgartner was 128,113 feet above the ground. Eight seconds later, as he entered the troposphere, he was in ‘free-flow’.

Dr Stephen Malley, a member of the medical back-up team, said: “He has been drinking a lot of Red Bull. Partly contractual and partly because he’s just one of those incredibly annoying people.

“And of course he couldn’t eat anything before the jump because as soon as he left the capsule it would have shot straight out the back end, thus destabilising his delta position.”

Malley added: “Felix’s training was focused on not soiling himself until the last possible moment.

“For most of us, just looking at a photo taken from the door of a capsule that is 24 miles above the Earth would make us urinate on ourselves immediately.

“Felix’s skill is managing to hold it together for that split second. Otherwise there would have been too much liquid, his chute would not have been able to cope with the extra weight and he would have hit the ground like a 2000 mile-an-hour space-hopper full of piss.”