People who hate massive TVs love them in other people's houses

ANYONE claiming to look down on enormous flatscreen televisions cannot get enough of them when they visit friends’ houses, their friends have confirmed.

Middle-class parents, hipsters and Guardian-reading pensioners who agree that TV rots the brain and looms over the living room will happily watch three hours of Blue Planet II while marvelling at the picture quality.

Graphic designer Tom Logan said: “I don’t see why anyone needs a television when they’ve got a laptop. But I thought I’d check out this ‘65in Ultra HD Sony Bravia’ that my friend Natalie bought, and it is impressive purely as a visual spectacle.

“I got her to put something stimulating on – the X-Men films are actually quite aesthetically innovative – and yes, from a technological standpoint it is amazing. In a cool, detached way.

“Even the four episodes of Come Dine With Me that followed were actually quite absorbing on such an expansive canvas. Remarkable.”

He added: “Of course, I’d never get one. A huge black slab dominating the room, like the monolith in Kubrick’s 2001?  No thank you. Though 2001 would look marvellous on it.

“Anyway, I haven’t got the wallspace because of the bookshelves. But on the other hand, f*ck the books, I’m getting one.”

How to use a public toilet without sitting on it 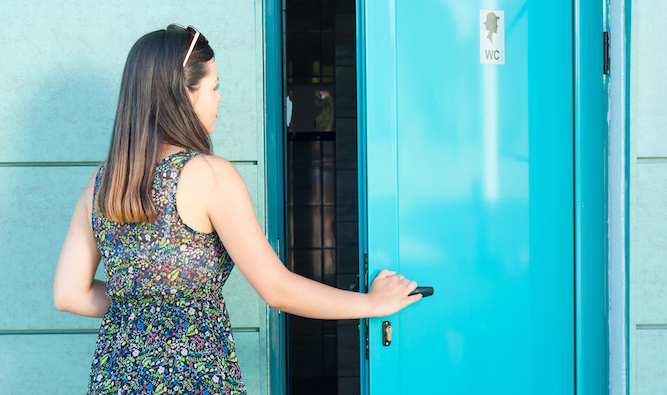 The popular technique of levitating above the seat not only ensures you won’t touch a molecule of stray urine or catch crabs, it’s also a great way to tone those thighs. Likely to result in piss all over the seat but that’s someone else’s problem.

Prefer to sit? Simply line the seat with paper, but a few sheets won’t cut it; you’ll need to empty the dispenser to be sure you aren’t tainted by stranger-wee and an outcast forever. Take in a few scatter cushions to add to the ambience.

The best way to kill germs is with heat, and the easiest way to do that without damaging the fixtures and fittings is with a generous dose of boiling oil. Plug in a deep fat fryer, rinse the seat, wipe up and take your piss. Be careful not to slip.

Simply sit on the toilet as you would at home regardless of condition, then go home and remove the outer layer of skin on your buttocks with a belt sander. Hygenic and safe.

A flatbed truck containing your own personal Portaloo following you wherever you go will mean you can make water on the move with no creeping dread.

The best way to be sure that you never have to sit on a dirty toilet is just to stay home.  Either that or wear nappies.