2022 all downhill from here

2022 has passed its joyful halfway point and only gets worse from now on, everyone has realised.

The end of June means the year gets darker and colder, coupled with spiralling inflation, huge energy price rises, unaffordable petrol and a poorhouse Christmas.

Professor Henry Brubaker, of the Institute for Studies, said: “Hope you enjoyed the good times, because they’re over. From now on every meal’s a shit sandwich.

“Whether you’re at home with post-Glasto Covid, dreading a foreign holiday that’ll involve 48-hour waits in airport at both ends, or simply watching your income and quality of life drop through the f**king floor, get ready. Things can only get worse.

“Our models show Boris Johnson hanging on though, with his majority reduced by another 12 or so as Tory MPs are charged with sex offences, and doing arse-all to help anyone.

“America will get worse, Russia will continue advancing, climate change will intensify, there’ll be nothing good on telly and your partner will be in such a foul mood there’s no chance of a shag. Suck it up, Britain. 2023 will be even worse.”

Nathan Muir of Hitchen said: “I have had two nights out in the pub and a family party this year, so I suppose I’ve been greedy. Bring on the misery!” 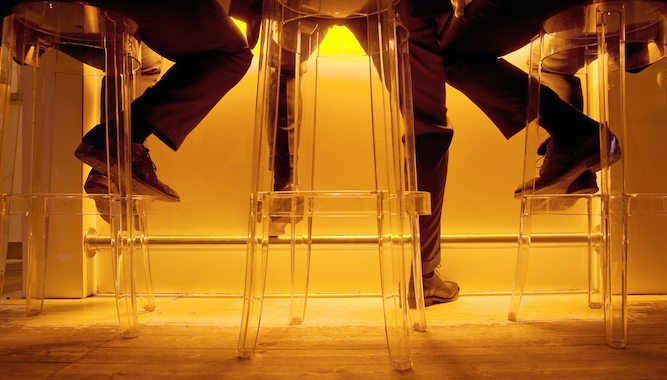 MUCH of daily life was invented as a bit of a joke and somehow we’ve bought it. Take these examples.

Bar stools: A surefire way to be incredibly uncomfortable, while simultaneously mildly anxious that your bag is out of reach ten miles away on the floor.

Cereal that is basically sweets: You can practically hear your child’s teeth falling out as they gobble down a bowl of Sugar Crunchy Choco Explosions. Or maybe that’s just the honeycomb chunks.

Turmeric lattes: Horrible yellow slop. Right now someone is pondering how to corner the market in blue drinks using something disgusting as a base ingredient. Maybe bath salts.

Posh cat food: The cat licks the jelly off the top and then looks at you balefully as if you are starving them, while you’ve been reduced to beans on toast again to support their Sheba Fine Flakes habit.

Pizzas with salad in the middle: Salad where the nicest, cheesiest bit of the pizza should be? F**k off.

Cleansing water: Invented by cosmetics companies for a laugh because normal water is also cleansing. Proof that idiots will pay £20 for anything if it’s in a nice box and has a French-sounding name.

Goji berries: Apparently will make you live longer. It will certainly feel like time has stopped when you’re trying to force these dry, bitter bastards down your throat.

Emojis: Trite, annoying and infantile. Your mum loves them.

Wide, calf-length trousers: Flattering to no one and surely designed as a joke, yet unquestioningly adopted as a stylish wardrobe staple.

Outdoor kitchens: Bored with your normal indoor kitchen? Install an extra one outside so you can watch forlornly from the window as it goes mouldy in the endless British rain.

Pizza Express dough balls: Flavourless with no nutritional value. You might as well eat leftover crusts from other tables. At least that would be free.

Small plates: The restaurant recommends four to five per person, which will cost a day’s wages and leave you eating your single piece of calamari in resentful silence.

Panna cotta: Bland, wobbly cooked cream which we have somehow been tricked into believing is a delicacy.

Pet insurance: Pay £35 a month to insure a dumb creature that doesn’t understand the concept of danger. When something expensive happens, find out it’s not covered. Continue paying regardless. Pet dies. Repeat.