AFGHAN refugees camped on the outskirts of Calais were today being urged to explain why they want to live in a country where people complain about the quality of the judges on a celebrity dancing show.

As French police closed down the 'Jungle' refugee camp, officials at the UK Border Agency warned the asylum seekers they would be arriving right in the middle of one of the worst Strictly Come Dancing-based rows this year.

A spokesman said: "Afghanistan is a vile place run by corrupt politicians, with a worthless currency and where nothing works.

"So the only real difference between there and here is that they're caught up in a never-ending tribal war and we're phoning the BBC to complain about Alesha Dixon. I swear to God, I honestly don't know which is worse."

Khalid Harzai, a 25 year-old engineer from Kandahar who arrived in Calais last month, said: "The conditions here are not good but at least they are not as bad as Alesha Dixon, who is totally out of her depth."

Meanwhile psychologist Dr Bill McKay said the intensity of the latest Strictly Come Dancing war suggests Britain is now clinging to its collective sanity like Leonardo DiCaprio hanging on to that plank at the end of Titanic.

He added: "I have urged many of my patients to stop watching television and perhaps read a book, but of course I may as well be asking them to sculpt a replica of the Coliseum out of corned beef."

Television viewer Nikki Hollis said: "Danni Minogue and Alesha Dixon are terrible judges. That Adrian Chiles is on telly too much and I think Justin Lee Collins is hysterical."

She added: "I'm allowed to vote in general elections and stuff."

Most Men Wishing They Were A 15 Year-Old Schoolgirl 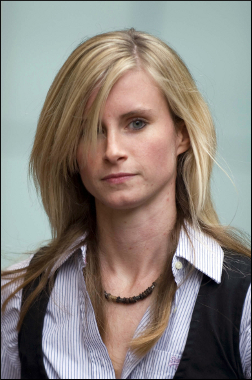 MILLIONS of British men last night admitted they would give anything to be a 15 year-old pupil at an all-girls private school.

As slim, blonde teacher Helen Goddard was jailed for having an affair with one of her students, men across Britain said the teenager was the luckiest junior lesbian in the world.

Tom Logan, from Finsbury Park, said: "That young lady has, perhaps unwittingly, been living my dream.

"There is absolutely nothing I would not give to be a curious teenager at an upmarket school surrounded by other girls who are all discovering their sexuality while under the supervision of a lithe, sexy music teacher who specialises in jazz.

"I would keep forging a new birth certificate so that I never had to leave."

Julian Cook, from Hatfield, added: "They are going to make a film out of this and it is going to be fantastic."

Meanwhile experts said Goddard could now add her name to one of the longest lists in Britain.

Professor Henry Brubaker, of the Institute for Studies, said: "We estimate that Ms Goddard is at least the 34 millionth person in Britain to have had sexual relations with a consenting 15 year-old.

"Unfortunately for her she is a schoolteacher and is therefore not allowed to think the same thoughts as normal people. But the really sad thing is, she is being jailed for having lesbian sex, which everyone knows isn't even proper sex."

Nathan Muir, a 34 year-old accountant from Peterborough, said: "Yes indeed, my name is on that list, as are the names of all my friends, most of the people in my office and just about everyone I was at school with."

He added: "Perhaps it was irresponsible of me to have sex with a 15 year-old girl but I've just always had this thing for older women."