Artificial tree envious of trees that get to die 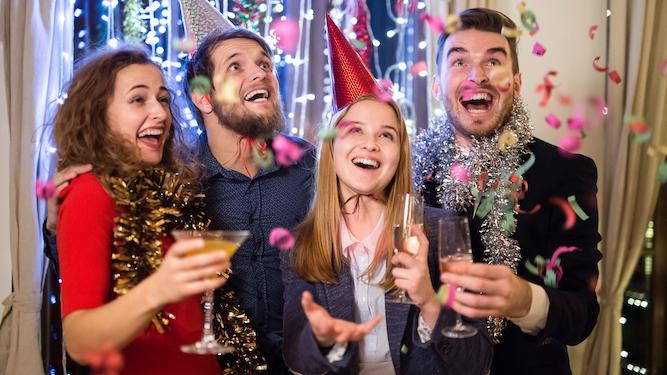 THERE are more shit ways to spend New Year’s Eve than there are stars in the sky. Here are just a few of them:

Going to a party full of total randos going apeshit because it’s New Year, where you shelter in a corner with your mates then walk home in the freezing cold.

Holding a party where your home gets wrecked by total randos going apeshit because it’s New Year.

Going to a fancy dress party where everyone else has taken it really seriously and hired costumes and you’re wearing a skeleton one you got cheap after Halloween.

Being off your head on drugs listening to a man explain how he made £220,000 gaming the bitcoin system but his f**king bank’s closed his f**king account.

Going to a shit party where you end up trapped in the kitchen with a committed evangelist for the DC cinematic universe at midnight because he believes he’ll get a kiss.

Going to a family party, where the booze runs out just after the off-licence closes.

Going to a small gathering at a friend’s house, with ample time to reflect that these aren’t really your best friends and you’ve settled.

Having friends for a small gathering at your house, with ample time to reflect as above but you’ve had to provide booze and nibbles.

Staying in with your partner, because it’s somehow even more tragic.

Staying in with the kids, because the hours from 8pm until midnight have never, ever been longer than when counting them down with two wired kids.

Going to a local pub, where you swiftly learn all the locals know each other and celebrate together and you’re there like Billy No-Mates.

Going out round the bars, all of which are packed to bursting with career arseholes reaching a drunken peak.

Working in a bar or pub serving the career arseholes reaching their drunken peak.

Going to a nightclub, where the bouncers demand an extra £20 per person to let you in before midnight because nightclubs are the happy face of organised crime.

Going to a comedy gig, where none of the comics have bothered coming up with any special material for the night and are doing the same tired just-moved-in-with-my-boyfriend shit they’ve been flogging around the circuit for years.

Going to Central London to watch the fireworks, with a freezing cold wait for two hours followed by a four-hour journey home.

Going to Edinburgh for Hogmanay, which is a great way to find out anti-English prejudice is no f**king joke and friendliness to other Scots is surpassingly rare too.

Going to Paris, where it turns out the locals spend the whole evening eating because of course they bloody do.

Going to Amsterdam, where it turns out the locals are completely f**king insane and throw lit fireworks at you.

Going to bed, because come on, the number’s changing, you should be there to see it.