Couple decide not to renovate kitchen

A COUPLE have decided to just leave their kitchen as it is.

Martin and Julie Bishop, from Peterborough, considered spending thousands of borrowed pounds on a new kitchen before deciding that it was a lot of bollocks.

Martin Bishop said: “Who fucking cares what our kitchen looks like? It’s got a cooker, a fridge, a washing machine and a worktop for the preparation of sandwiches.”

“I had thought about creating a Nigella-inspired wonderland. But then I remembered that I’m a human being with better things to do than care about this sort of utter fucking nonsense.”

The couple revealed that following their decision they have been shunned by friends who have accused them of being communists.

Julie Bishop said: “We’re not going to redo the bathroom either. So fuck you.” 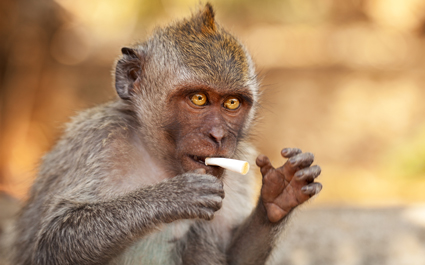 WORN-DOWN parents have purchased a cigarette-smoking monkey as their young son’s Christmas gift.

Mother Mary Fisher admitted buying the nicotine-addicted grey monkey did not feel quite right, but that her nine-year-old son Toby just kept on badgering her.

She said: “At first we were adamant, I mean there are so many reasons not to buy a monkey, especially one that smokes 60 Rothmans a day.

“But every time the advert for ‘Fags Monkey’ came on television he would drag me into the room and explain how it would be educational and how Wayne Haye’s parents have said he could have one.

“I explained that it was expensive, inhumane and a rabies risk. But whatever I said he would just reply ‘fags monkey, fags monkey’ in a sing-song voice.”

The monkey, which is larger and stronger-looking than expected, is now hidden in the family’s loft where it will consume fruit and cigarettes until Fisher’s husband brings it down on Christmas day in a gift-wrapped cage. It has already bitten Mary Fisher on her leg.

However Fisher’s son Toby said: “I wanted a real live monkey that smokes cigarettes for Christmas, but that was last week. Now I want some Lego.”