Couples declare their love is as strong as a £1.29 padlock

THE love lock craze has seen thousands of couples pledging their devotion is as unbreakable as a padlock from Poundstretcher.

The craze, which has already collapsed bridges in Paris and Venice and has now reached the UK’s romance capital Birmingham, sees couples write their names on padlocks, secure them to a bridge and throw away the key, safe in the knowledge that their love is as eternal as vandalised street furniture.

Street cleaner Wayne Hayes said: “By writing their names with a Sharpie the couples are saying ‘Our love will never fade,’ unless exposed to about five days of rain and sun.

“Throwing away the key means ‘Nothing will ever separate us,’ apart from me, in two seconds, with a flat-head screwdriver.

“Sometimes we take the locks away to be melted down for scrap, which I suppose is symbolic of their owners getting back on the market, or sometimes they’re thrown into the filthy canals to rust away in the silt, which is symbolic of the couple moving in together.

“Either way they’re a complete pain in the arse, just as somebody else’s love always is.” 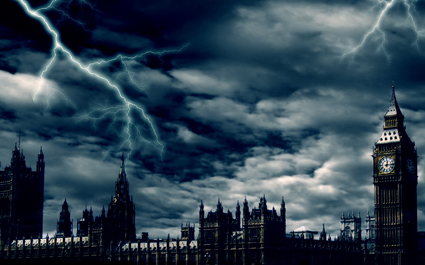 THE Met Office has warned that southern England is about to be hit by the sort of cross-fire hurricanes not seen since Mick Jagger was born.

These unusual climatic conditions are the result of the tail end of Typhoon Dylan which has seen the Eastern US battered by hard rain and idiot winds.

Meteorologists believe the severe weather could continue with a storm on Monday, that Tuesday will be just as bad and Wednesday worse, with the outlook for Thursday also described as “sad”.

The public is being advised to get some shelter and stay away from railroad tracks due to a severe risk of being thunderstruck and left shaking at the knees.

Driving is likely to be hazardous due to the storm and the psychotic hitchhikers mysteriously drawn to it.

A Met Office spokesman said, “Avoid dead end streets where deadbeats meet as there is a risk of such areas being hit by white lightning.”

He added: “Something’s blowing in my head, winter’s ice it soon will spread.”

Electrician Tom Logan from Liverpool said: “The weathermen are always predicting a hurricane but in the end it is usually more akin to something by Mumford & Sons.”