A FATHER refers to women’s breasts as ‘knockers’, it has emerged.

Bishop’s 13-year-old son Ian said: “I had no idea what he was on about. I thought he was describing some furniture or perhaps a race of elf-like creatures from a children’s book called The Journey of the Knockers.

“Then he was like ‘no, look at her knockers’. I was like ‘where?’ and he just pointed at a woman’s chest.

“I’m not sure if it means breasts or nipples. I mean, do dogs have knockers?”

Martin Bishop said: “I’m just teaching him the ways of the world, or at least the world as it was in 1979.” 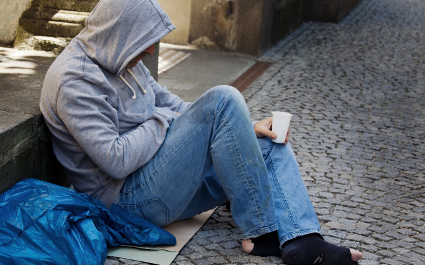 HOMELESSNESS is an exciting lifestyle choice and nothing to do with cutting benefits, the government has claimed.

After figures showed homelessness was up by 134 per cent, ministers said it was just people who hated being tied down to a house and loved being out in the fresh air.

“One night they might stay in London’s glittering West End, the next they’ll visit the historic city of Bath. They’re like canal boat owners, but with a sleeping bag instead of a barge.

“People are choosing this great lifestyle and it’s nothing to do with stopping their benefits for six months if they’re five minutes late for a bullshit training scheme.

“Most homeless people have plenty of cash anyway, because they do odd jobs as they travel from village to village, or go hunting for buried treasure like Huckleberry Finn.”

Homeless person Roy Hobbs said: “The DWP told me I’ve been re-categorised as a ‘jolly vagabond’ and all I’m entitled to is some bread in a cloth on a stick.