A DAD putting his toddler to sleep then fell unconscious with a book on his lap for 72 hours, he has admitted.

Tom Logan read a story to two-year-old Jamie and agreed to stay in his bedroom to ‘keep him company’ on Saturday evening, and regained consciousness late on Monday afternoon.

He said: “I told her I’d stay just while he drifted off to sleep. I held her little hand in mine. I thought about the takeaway and three bottles of wine me and Mummy were going to have later on, and that’s the last thing I remember.

“One minute I was fielding inane questions like ‘Why do we have armpits, Daddy?’, next I’d blacked out. Could she have put something in my drink? Would a toddler be capable of something like that?

“I do feel refreshed. I also feel like I’ve missed out on a big chunk of my life just because I have a child. More so than usual, I mean.”

Wife Lindsey said: “I considered waking him up but then I thought nah, all the more wine for me and I get to choose the film. It was a great night.” 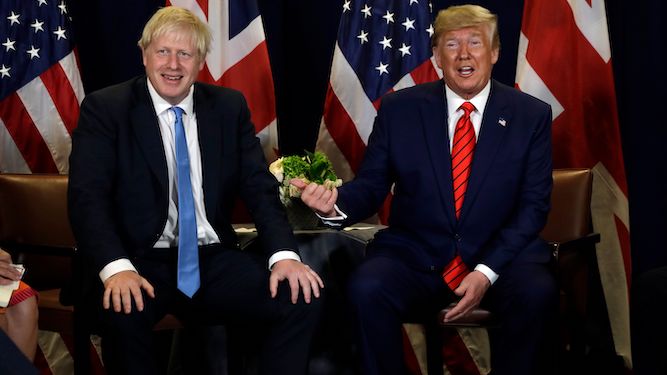 THEY’VE told me not to get involved in this election. So I won’t. I like Boris a lot and everyone should vote for him. Here’s my plan he’ll follow:

2: America is doing so great. You wouldn’t believe how great. A lot of the great things we’re doing people don’t even talk about, that’s how great. And you’re Great Britain, so why would you want trade deals with anyone not great? So only trade with us.

3: All the boring stuff? We’ll take care of it. Healthcare? We’re the best in the world. You want that. Police? There are so many movies about how incredible our police are, you can’t imagine. Roads? We’ve got freeways. They’re better.

4: I’ll make Scotland part of Britain, okay? They want that. They love me up there. So when I take over, Scotland’s part of the deal. I’ll pay. That’s on me. I’m a very generous guy.

5: The BBC, that’s a problem. The things they say about me? That’s got to stop. We’ll give the BBC to Piers. Perfect.

6: In the World War, the good one, our GIs came over here and stayed with British families. Made love to their beautiful daughters. We will bring that back. Forcibly if necessary. That’s a promise.

7: Real football. Because the football you have, that’s this thing the Brazilians invented because they couldn’t get NFL broadcast rights and it’s cheap, it’s bad, it’s no good. With Trump you’ll get the real football with quarterbacks and cheerleaders. We’re done? Okay. Vote for me.