THE prime minister has unveiled a radical new concept for social change involving youngsters with neckerchiefs being helpful.

As part of an innovative government scheme which will make everything fine again forever, young people in khaki shorts will perform useful tasks such as litter picking and mildly incompetent car washing under the tutelage of a responsible adult.

David Cameron said: “It’s just something that popped into my head while I was in process of single-handedly fixing the country last night.

“What ‘Broken Britain’ needs is a type of non-military public service organisation for young people. I haven’t decided what I’m going to call my explosive new idea yet but it’s between ‘the Scouts’ and ‘the Boys Brigade’.

He added: “Compulsory meetings will be held weekly in freezing cold purpose-built sheds that smell of hormones and Robinson’s Barley Water.

“If a young person fails to attend I will personally visit their mum and advise her to stop their pocket money.

“What with this and demolishing the clearly flawed notion of humans having rights, I’m a hotter than a Tottenham carpet shop.”

Roy Hobbs, from Peterborough, said: “I have this weird feeling that I was involved in something vaguely similar when I was about nine. But it must have been a dream because a) I had a thing called a woggle and b) otherwise this country’s reins are in the hands of a fucknut.

“And clearly the man who coined the brilliant phrase ‘Broken Britain’ wouldn’t be spouting some recycled gimmicky bullshit. After this, I think he has earned the right to go back to his villa in Tuscany.” 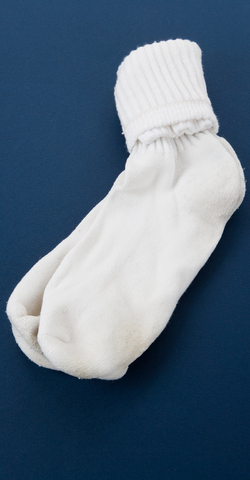 BRITAIN’S festival of righteous indignation has finally resulted in someone being jailed because of tube socks.

Courts in riot-hit cities have been told to disregard the ‘sentencing rule book’ – or as some experts have called it, ‘the law’ – and imagine they are administering justice in the mid-14th Century.

Sentencing 12 year-old Stephen Malley, Croydon magistrate Martin Bishop, said: “These are fine, decent young socks which you have no doubt defiled. Indeed, one dare not insert one’s fingers for fear of what may lurk at the toe-end.

“In a perfect world I would be allowed to kill you right now with my bare hands, but it is not a perfect world and so the best I can do is sentence you to eight years in a medium-sized dog cage.

“You will also have your favourite pair of socks confiscated and given to your most hated enemy so that you may experience the same sense of loss and trauma as the institutional shareholders of JD Sports.”

“The fact that you are probably the first and last person to get eight years for stolen tube sock possession is easily the most irrelevant thing I have ever heard.”

“But I suspect the new sentencing policy is not so much about differentiating between crimes as it is about sending a signal to poor people that they are no longer welcome. Something I am sure they will understand.

“Hopefully some of them will get their lives back on track and perhaps even become Members of Parliament who will steal £9000 from the taxpayer and get 14 minutes in an open prison that’s probably nicer than some of the hotels they lied about staying in.”