Latest figures show almost 50% of girls spit-roasted by high-fiving sportsmen in mid-price hotels in the last year have attended a specialist, fee-paying slut academy, such as Â£6,000-a-term St Agatha’s in Guildford.

St Agatha’s, whose motto is Latin for ‘orange and dirty’, teaches a broad curriculum, including threesomology and how to arrange a floral display with a mouth full of happily married wing-back.

But Professor Henry Brubaker, of the The Institute for Studies, warned the rise of private skank education was creating a ‘two-tier’ system of vacuous,
bow-legged tarts.

He said: “The girls from the top schools are getting all the premier league
footballers, while those without formal training are restricted to
lower-status players, spiky-haired local radio DJs and Beppe from Eastenders.

“They’d consider themselves lucky to fellate Dean Gafney behind a skip.

“Skankosity, once the preserve of the untermenschen, is being increasingly co-opted by the middle class. A bit like
caravan holidays and having an allotment.”

Would-be skank Nikki Hollis said her state school education has
left her excluded from the upper echelons of slutting.

“I think we had one lesson where we watched a video of toads mating and
got a leaflet about gonorrhea. How’s that going to help me lure the
cream of Britain’s sporting and musical talent to the Stoke Holiday Inn
Express? Just because my family aren’t rich, it doesn’t mean I can’t
have dreams.”

She added: “But I’d do anything to achieve this. And when I say
anything, I mean utter filth.”

Webber To Start Next Race In A '98 Punto 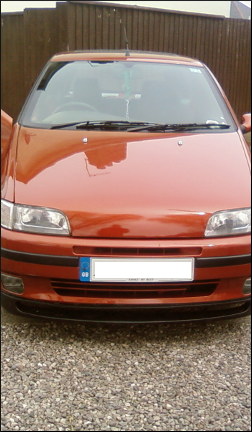 FORMULA 1 car-pointer Mark Webber will start the next Grand Prix in a
1998 Fiat Punto.

Red Bull’s management have promised Webber that the ashtrays will be cleaned and the boot emptied in order to make the car as competitive as possible. The Punto will also go through the Executive Valet at the local Esso station rather than the Standard Service.

Webber said: “There is no question of favouritism in the Red Bull Team between myself and Sebastian Vettel, although his 14-litre jet powered car doesn’t need push starting in cold weather.”

The controversy started before the Silverstone race when Webber’s car was stripped of 90% of its parts to make an amusing sculpture for Vettel’s dressing room. But the Australian won the race despite his car consisting of a chassis, three wheels and a wing mirror.

Miniature racing pundit Eddie Jordan said: “It was an amazing victory for Webber, as he was basically having to propel his car around the track like Fred Flinstone.

“I’ve seen nothing like it since 1975 when Niki Lauda’s Ferrari broke down at the NÃ¼rburgring and he sprinted the last 15 laps carrying his car over his head.”

Margaret Hollis, the current owner of Webber’s race Punto, said: “I’ve had it since new and it’s a lovely little run-around so it’ll be perfect for the tight corners at Hockenheim.

“I only use it to go to Sommerfield, but I’ve not changed the oil thingy since I bought it so he may want to have that looked at by a man.”